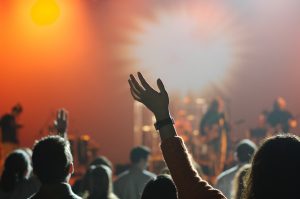 Lifest is an annual 4-day Christian music festival that takes place in Oshkosh, Wisconsin, USA, each July. It attracts around 20,000 attendees per day and features around 100 artists performing on 6 different stages. It is a member of The Christian Festival Association, a group representing all the major Christian music festivals held in the United States and Canada, which are attended by a combined annual total of over 1 million people.

The music served up at these festivals is ‘Contemporary Christian Music’ – better known as CCM – most of which can be accurately labelled ‘Christian rock’. This worldly genre of music entered the evangelical scene through the hippies who professed salvation back in the 1960’s in California (the so-called ‘Jesus people‘). Their mantras were “Music is neutral” and “Why should the devil have all the good music?”.

Is there not a cause?

Why write about these matters? Isn’t it just a minor issue? Aren’t we better concentrating on more positive, edifying subjects? Why quibble over music styles when we could be reaching the world for Christ in a ‘language’ they understand?

One has no desire to waste time with non-issues, nor to be unnecessarily ‘negative’ and ‘critical’, but in light of the way in which the CCM movement has swept everything before it and led millions in the wrong direction, a warning voice must be raised – especially when warning voices are so few and far between.

One of the most lamentable and shocking features of evangelicalism today is the attachment many Christians in otherwise ‘traditional churches’ have developed toward this fleshly music. Their youth, and many older members, have become addicted to CCM. This emotional attachment, both to the music and to their ‘favourite artists’, has rendered them unwilling to separate from it, even when the radical theological and ecumenical errors and associations of the whole system are pointed out. Few are willing to take a stand and deny self. The cost of letting go of the fleshly enjoyment they derive from the seductive soft and hard rock beats is too great. Their attachment to the beat is greater than their allegiance to the Biblical commands to separate from and to not love the world. CCM has become an idol.

Attendees at Lifest can choose from three ‘worship services’ on the Sunday, the last day of the event. In July 2015 the options were:

Here is the founder of Lifest, Bob Lenz, with Bishop David Ricken, in a promo video for Lifest 2015:

Why would Bob Lenz, an evangelical, join hands in this way with a Roman Catholic Bishop? Perhaps Bishop Ricken is an ‘evangelical Catholic’ who doesn’t really believe in Mary worship, the Rosary and transubstantiation? Far from it, Bishop Ricken’s Roman Catholicism is thoroughly orthodox. For example, he approves of the ‘Marian Apparitions’ at the ‘Shrine of Our Lady of Good Help’ in northern Wisconsin, USA, where ‘Mary’ is supposed to have appeared to Adele Brise in 1859 and announced, “I am the Queen of Heaven, who prays for the conversion of sinners.” Look up Jeremiah 7:18 for the identity of the ‘Queen of Heaven’. The Queen of Heaven is a pagan goddess.

Take a look at Bishop Ricken, with an idol of Mary in the background, promoting a 2014 ‘Marian Conference’:

What further proof is needed that the Christian festival movement is deeply compromised with the worst form of ecumenical error? Hundreds of CCM artists are happy to perform at Lifest and be paid for participating in an event that unashamedly proclaims unity with Roman Catholicism, thereby giving approval – whether they like to admit it or not – to its false gospel and its idolatry. The martyrs in Reformation times would have rather died than compromise with Roman Catholic error, yet today’s CCM artists are happy to make a living out of compromise. Money talks – Roman Catholic festival goers pay the same ticket price as evangelicals. (Prime on-stage seating – $60 a day).

The pre-service music at Lifest’s 8.00am Sunday Mass was provided by the Roman Catholic singer Matt Maher. To give you an idea of Maher’s beliefs and practices consider the following. In April 2008 Maher ‘led the worship’ at the ‘Rally for Youth and Seminarians’ during Pope Benedict’s visit to the USA. The event attracted a 25,000 strong crowd. The concert that preceded it featured Kelly Clarkson, Third Day, Salvador, Toby Mac, Three Graces, Father Joseph Espaillat, Father Stan Fortuna, Fragile Tomorrow, and Full Armor.

You can see Maher below, with Pope Francis at another event – World Youth Day 2013 in Rio, Brazil – singing his song “Lord, I Need You” during a Roman Catholic Mass before a crowd of 3-4 million people. It is important to understand what’s happening in this video. The silence at the start of the clip indicates that the wafer has been ‘consecrated’ – changed into the actual, real body of Christ – and has been placed in the monstrance, paraded about and set up on high for the purpose of eucharistic adoration. During the silence, the Pope, Maher and the rest of the crowd are worshipping the ‘Holy Sacrament of the Eucharist’ in the golden monstrance above ‘the altar’. This must surely have been one of the most spectacular performances ever given of the hypnotic idolatrous ritual of the Mass.

The Roman Catholic Church teaches that each time Mass is offered, the sacrifice of Christ is repeated. That is, Rome teaches that though a new sacrifice is not offered in the Mass, one and the same sacrifice as happened on the cross is repeated. Through this act, satisfaction is given to God for sins committed against Him by the communicants present at the Mass, and by departed souls in purgatory. This is a direct contraction of the Bible’s teaching in Hebrews 10:11-12 which announces the “once for all” character of the sacrifice of Christ on the cross 2,000 years ago. Small wonder that the 31st of the Church of England’s 39 Articles – written during Reformation times – called the Mass a blasphemous fable and a dangerous deceit.

None of this should surprise readers familiar with what’s going on in evangelicalism today. The Christian rock scene is fully in step with Rome. CCM is radically, unashamedly and irredeemably ecumenical – and therefore off limits for Christians who take their Bibles seriously. CCM is one of the glues that hold the ecumenical movement together. “We all love and sing the same songs” is a powerful bulldozer that sweeps all doctrinal quibbles before it. Transubstantiation, Mary worship, confession to a priest and the many other serious errors of Rome are no hindrance to ‘fellowship’ in the ‘worship industry’.

Why should we be concerned? Because this represents the ultimate ‘slippery slope’. Listening to this music leads to following the artists. Following the artists leads to attending the events. Attending CCM events breaks down a person’s separation and Biblical discernment. The strongest, most Biblically intelligent Christian, who gets caught up in the CCM scene, will find it impossible to maintain faithfulness to the Word of God in the long run. Those who have fellowship with CCM by listening to it and attending its events are having fellowship with a betrayal of the Word of God.

Even those artists considered to be safe – those who have written some of the songs with more serious lyrics – have gone down the ecumenical road. In July 2012, Keith and Kristyn Getty and Stuart Townend joined Matt Maher on NewsongCafe on WorshipTogether.com. They played and discussed a song co-written by Townend and the Gettys called ‘The Power of the Cross’. By appearing with the world’s leading Roman Catholic music artist –  but issuing no caveats or warnings of any kind – Townend and the Gettys promoted ecumenical unity to their millions of fans.

We are living in times when discernment in evangelicalism is at an all time low. “As long as the lyrics are good it doesn’t matter who wrote the song, or what they believe, or who they are involved with” is an excuse used to cover all kinds of compromise and rock beat addiction. It is time for a wake up call for separation from error. Does not the Bible warn “A little leaven leavens the whole lump”? If we cannot – or will not – stand on this issue, on what issue will we stand?

Christians should not be ‘liking’ on Facebook, or listening to MercyMe, Third Day, Newsboys, Casting Crowns, Hillsong, LeCrae, Rend Collective or other bands and artists like them. Aside from the merits of the lyrics of any particular song – and one is not denying that some good lyrics have been written by CCM artists – here are three reasons why separation from all forms of Contemporary Christian Music (CCM) is necessary:

1. CCM is a multi-million dollar industry of paid professionals who ‘perform’ and ‘entertain’ in the name of ‘worship’. Everything the New Testament says about worship and spiritual gifting runs contrary to this.

3. CCM is ecumenical. It is in full fellowship with the Roman Catholic Church, which preaches another gospel, bringing it under the curse of Galatians 1:8-9. That is to say, fellowship with CCM is fellowship with Rome, by association. Make no mistake, CCM is the sound track of the ‘one world church’, which is the precursor to the antichrist delusion of the last days.

The following Bible verses outline a Christian’s responsibility in light of these issues:

Rom 16:17 “Now I beseech you, brethren, mark them which cause divisions and offences contrary to the doctrine which ye have learned; and avoid them.”

Rom 12:2 “And be not conformed to this world: but be ye transformed by the renewing of your mind, that ye may prove what is that good, and acceptable, and perfect, will of God.”

2 Cor 6:14 “Be ye not unequally yoked together with unbelievers: for what fellowship hath righteousness with unrighteousness? and what communion hath light with darkness?”

Jude 1:3 “Beloved, when I gave all diligence to write unto you of the common salvation, it was needful for me to write unto you, and exhort you that ye should earnestly contend for the faith which was once delivered unto the saints.”

To give you an idea of the atmosphere at Lifest, here are two clips from July 2015:

1. Chris Tomlin looking to see if there are “any crazy dancers out there”