What About Transubstantiation and the Mass? 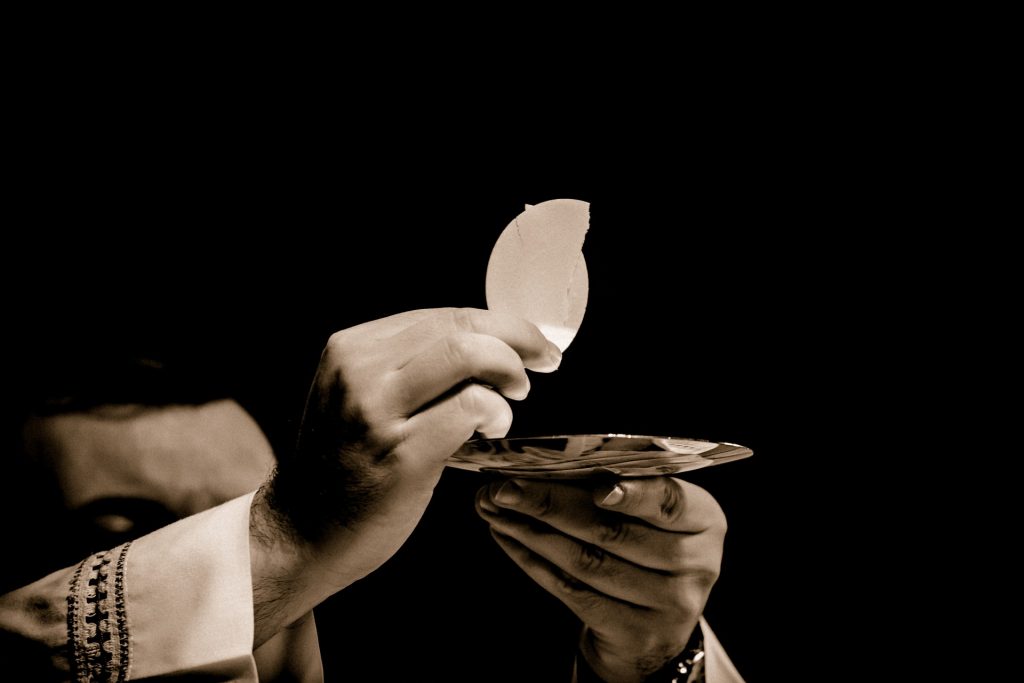 What about Transubstantiation and the Mass?

Once a matter of life and death, transubstantiation is now generally a matter of indifference.

Turn the clock back 450 years and transubstantiation is one of the hottest issues of the day. On the one hand the Roman Catholic Church taught: “If any one shall say that…[in the Mass]…there remains the substance of bread and wine together with the body and blood of our Lord Jesus Christ; and shall deny that wonderful and singular conversion of the whole substance of the bread into the body, and of the whole substance of the wine into blood, the species of bread and wine alone remaining, which conversion the Catholic Church most fittingly calls Transubstantiation, let him be anathema [cursed]” (1551, Council of Trent, Session 13, Canon 2).

On the other hand, the Waldensians, Hussites, Lollards, Huguenots, Anabaptists and other Reformers, followed later by the Covenanters, Puritans and Protestants of many denominations, believed that the bread and wine merely represented the body and blood of Christ. (Half way between the two, Luther held to ‘sacramental union’, teaching that the body and blood of Christ were truly present in and with the consecrated bread and wine).

This was no mere difference of opinion. The Roman Catholic Church, through the Office of the ‘Holy’ Inquisition, tortured and killed, sometimes in the most horrific ways imaginable, those who did not accept its doctrine of transubstantiation. Gratefully, the killing has stopped, but despite the deliberations of the Second Vatican Council (1962-65), the publication by the Vatican of the new Catechism in 1996 and the advent of the Catholic Charismatic Movement, the Roman Catholic Church continues to uphold transubstantiation as a central non-negotiable dogma. Paragraphs 1374 and 1377 of the new Catechism of the Catholic Church, the first officially published Catechism for 400 years, produced in 1992 under the authority of the late Pope John Paul II, clearly state that the bread and wine become the real body and blood of Christ in the Mass.

Rome not only teaches transubstantiation, but also promotes the worship of the consecrated bread and wine, through special orders of men and women dedicated to the perpetual adoration of the Eucharist, such as the Nuns of the Perpetual Adoration of the Blessed Sacrament, the Sisters Adorers of the Precious Blood and the Congregation of the Blessed Sacrament. In Roman Catholic countries, a priest may carry a consecrated wafer through the streets, held aloft in a monstrance, for the faithful to see and kneel before it in adoration and worship.

Scientifically, transubstantiation is impossible. If the shape, colour, flavour, odour, texture and constitution of the bread and wine remain the same, they cannot be said in any sense to have turned into the body and blood of Jesus Christ during the Mass. All the evidence supports the fact that no change whatsoever takes place. So how do intelligent doctors, lawyers, accountants and other non-professional Roman Catholics, convince themselves otherwise?

The theory of transubstantiation rests on the unscientific theories of the Greek philosopher Aristotle (384-322 BC). Prior to Christ’s birth, and a long time before the advent of modern science, Aristotle taught that all matter consists of two elements: accidents (outward appearance perceived by the senses) and substance (inward essence which the mind grasps and which constitutes essential reality). Based on this ancient misunderstanding of the nature of things, Rome says that at the point of consecration in the Mass, the substance of the bread and wine change, while the accidents remain the same.

The impossibility of transubstantiation

Does the Bible teach that the bread and wine mysteriously turn into the real body and blood of Christ when the words “This is my body” are spoken? Consider; when the Lord Jesus spoke those words in Matt 26:26, His actual body was reclining at the table in the upper room. This is enough to prove that Christ was speaking in representative, not literal terms.

Taking the Lord Jesus literally, when He is really speaking figuratively, is a common mistake. In Matt 16:6 the Lord warned His disciples to beware of “the leaven of the Pharisees and the Sadducees”. They took Him literally and began worrying about the fact that they had no bread with them. But the Lord was referring to false doctrine, not literal bread. Likewise, when the Lord said “I am the door” and “I am the true vine”, He was not speaking literally. If “this is My body” is taken literally, what is the Roman Catholic Mass if not some mysterious form of cannibalism? How could Peter have partaken of the literal blood of Christ in the Upper Room, only to command a few years later that all Gentile Christians abstain from blood (Acts 15:29)?

Rome feels it has all the scriptural proof it needs for the doctrine of transubstantiation in John ch. 6, where the Bible makes clear that eating Christ’s flesh and drinking Christ’s blood is a ‘must’. So, how should this passage be understood?

The context of John ch. 6 has nothing to do with the Lord’s Supper. It is a passage about Christ coming into the world and people finding true satisfaction in Him. As the Jews argued among themselves saying, “How can this man give us His flesh to eat?”, Jesus explained what He meant in greater detail. The main verse under dispute is: “Except you eat the flesh of the Son of man, and drink His blood, you have no life in you” (John 6:53). Since eating satisfies hunger and drinking quenches thirst, the Lord had earlier said: “I am the bread of life; he who comes to me shall never hunger and he who believes on Me shall never thirst” (John 6:35). Linking verse 35 with verse 53, it becomes clear that eating Christ’s flesh simply means coming to Him, and drinking Christ’s blood means believing in Him. Period. Repentant sinners ‘eat Christ’s flesh and drunk of His blood’, in a spiritual sense, at the moment of conversion.

In a clear reference to His death, the Lord Jesus also stated in this chapter that He would give His flesh for the life of the world (v51). But according to Roman Catholicism, the disciples were given the flesh of Christ to eat in the Upper Room, before Jesus ever went to Calvary, thus confusing and obscuring the real work accomplished by Christ on the cross.

As the Lord summarised His teaching in John 6, He stated, “the flesh profits nothing: the words that I speak unto you, they are spirit and they are life” (John 6:63). Even if a Priest could give the Lord’s flesh to a communicant, it would profit nothing. The life is in the Spirit, not in the flesh. True, the Lord is able to transform things by miraculous means. He turned water into wine at the wedding in Cana of Galilee. However, if He had done the miracle in the way the Roman Catholic Church understands the Mass, Christ would have turned the water into wine, while leaving it in every way resembling water. Imagine the scene. The servants take the ‘wine’ to the Governor of the feast. He pours out a glass. As he sips it he exclaims “This isn’t wine – it’s water!” The servants answer, “Oh no, it just looks, tastes and smells like water, but in reality it is the choicest wine”!

What difference does it make?

If Roman Catholics sincerely believe that Christ is present in the Eucharist, is there any great harm done? Consider: the 1996 Catechism of the Catholic Church states that, in the Mass, Roman Catholic communicants receive heavenly food that nourishes their souls and serves as an antidote against sin. Also promised in the Eucharist is the source and summit of the whole Christian life, the source of salvation, Christ Himself (see paragraphs 1324-1327, 1395 & 1405 of the new 1996 Catechism). Transubstantiation is undoubtedly therefore a dangerous deception. The Mass promises salvation, when in reality, all that communicants receive is a wafer of unleavened bread.

Furthermore, transubstantiation encourages the sin of idolatry. Millions are directed by Rome to worship the Eucharist “with supreme adoration” (paragraphs 1378-1381). The Mass further claims to be not merely a symbolic ritual, but an actual sacrifice. In the ‘offering of the Mass’ there is a real victim, the Lord Jesus, under the appearance of bread and wine. Rome teaches that the sacrifice of the Mass and the sacrifice of the cross are one and the same. When the priest offers up the bread and wine on the altar, it is considered by Rome to be a true and proper sacrifice whereby Jesus, in an unbloody immolation, offers Himself a most acceptable victim to God, as He did on the cross, for the sins of the living and the dead. Roman Catholics take the Mass in order to receive the benefits of the sacrifice of the cross. It is a sacramental part of their salvation.

The concept of an ongoing sacrifice is wholly foreign to Scripture. Christ finished the work of salvation on the cross (John 19:30). He wishes us to remember Him, not sacrifice Him. Hebrews Ch. 10 states in no uncertain terms that the sacrifice of Christ was ‘once for all’ – never to be repeated or continued in any form (Heb 10:18, 11-14). After Christ completed the work of redemption, He sat down at the right hand of the Father. There He waits until His enemies become the footstool of His feet (Heb 10:12-13). Yet according to Roman Catholicism, Christ is rising from His throne tens of thousands of times each day, coming to earth and being re-presented to His Father as a true propitiatory victim for the sins of souls in purgatory and on earth. Thus the error of the Roman Catholic Mass and its core doctrine of transubstantiation is a great offence to heaven and a blasphemy against the finished work of Christ.

While the Pope of Rome teaches his followers to seek salvation partly through the daily sacrifice of the Mass, he is actually hastening their progress there. What a tragedy that daily around the world, millions of Roman Catholics pay for Masses to be said for their departed loved ones, when both transubstantiation and purgatory are nothing but figments of Rome’s imagination. Salvation is only and ever found in the person of Christ through the finished work of Calvary. The cross was not simply necessary – it was enough. Sinners are justified by His blood alone, without works, sacraments or ‘the church’.

In days of increasing ecumenism, when the Roman Catholic Church is being accepted as a fully ‘Christian Church’ – despite the fact that at the very highest level it dogmatically asserts all kinds of major doctrinal errors – prayers to Mary, purgatory, the confessional, Papal infallibility, salvation by works, compulsory priestly celibacy, indulgences and the equal authority of ‘the Church and tradition’ with the Bible – it is vital that biblical churches and individuals remain separate from and warn against the continuing idolatrous system of Roman Catholicism.