Charles Darwin and the Origin of Species 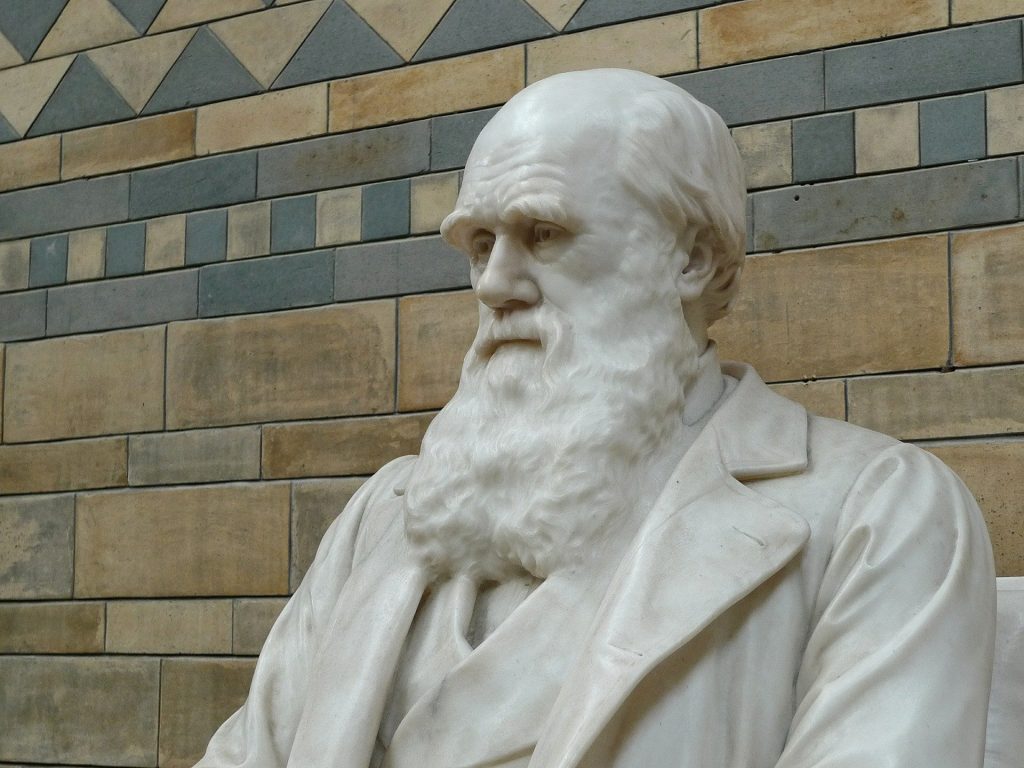 Charles Darwin and the Origin of Species

In the BBC series ‘Great Britons’ in 2002, Charles Darwin was listed as the 4th greatest Briton ever to have lived. In his contribution to the series, BBC correspondent and atheist Andrew Marr stated: “We have many local heroes; we have only one world changer. His name is Charles Darwin.” In a similar vein James Watson, co-discoverer of the structure of DNA, stated, “Charles Darwin will eventually be seen as a far more influential figure in the history of human thought than either Jesus Christ or Mohammed.”

Darwin’s claim to fame goes back to 1838 when he became convinced of a radical idea: “species are mutable productions.” In layman’s terms that means there’s nothing to stop fish evolving into amphibians. Back in the 19th century, so sacred and universal was belief in the fixity of species that just verbalising his contrary conclusion felt to Darwin like “confessing a murder.”

Prior to Darwin, the Bible’s statement that living things reproduced “after their kind” was unknowingly being taken too far by theologians and scientists. It was widely thought that every variation now visible in nature had existed in its current form in the Garden of Eden. Against this background, when Darwin observed the variations that dog-breeders were producing, it made him wonder – if man could bring about such changes in so short a time, perhaps over millions of years nature, without God’s help, had produced all the various species of plants and animals in the world from a single-celled ancestor.1

Then there were the thirteen diversified but similar species of finches Darwin documented on the Galapagos Islands. Rather than God creating each separate species of finch, Darwin reasoned that all the finch types probably originated naturally from a common ancestor by gradual modification and ‘natural selection’. Darwin’s theory was sublimely simple: favourable advantageous variations in offspring, naturally selected in the struggle of life over long periods of time, result in the formation of new species. His idea had some truth in it, but in positing that organism change was, to all intents and purposes, unlimited and infinitely variable, he far exceeded what was scientifically verifiable. (Darwin and his contemporaries were unaware of the science of genetics).

The fact is, natural selection’s effect on finch beak size could never begin to explain where the finches came from in the first place, nor did it prove that all of nature was one great continuum or ‘tree of life’. In truth, other considerations, like the fossil record, stood against Darwin’s whole idea. Darwin puzzled, “Why then is not every geological formation and every stratum full of such intermediate links? Geology assuredly does not reveal any such finely graduated organic chain; and this, perhaps, is the most obvious and gravest objection which can be urged against my theory.”2

Still, Darwin decided to set forth his theory, burying his doubts under what he called “the extreme imperfection of the geological record.” His book, On The Origin of Species, was a publishing sensation. Almost overnight, the prevailing belief that all the beautiful and ingenious contrivances in nature were creations of God collapsed. ‘Design’ was merely the ‘appearance of design’, brought about by ‘natural selection’. God, if He existed at all, was clearly redundant – and man, far from being created in the image of God, was a mere cousin of the ape. Small wonder that Ernst Mayr, the 20th Century’s most prestigious Darwinist authority called Darwinism “…perhaps the most fundamental of all intellectual revolutions in the history of mankind.”3

So, what is the truth? Did every species in nature evolve by mutation and natural selection from an ancient spontaneously generated ‘replicator’, or did God create each plant and animal as we see them today and place them in their current location during creation week? Actually, neither is true. It is essential to understand that the ‘created kind’ mentioned repeatedly in Genesis chapter 1 is often at a higher level of classification than the modern-day species or even genus. It’s quite possible that even some whole ‘orders’ of animals may have derived from an original ‘created kind’. The fact that different species and genera can be interbred – a zebra with a horse, a lion with a tiger and a camel with a llama – proves that, even if their offspring are in some cases sterile, they may have descended from the same original created kind.

The evidence available through, for example, the study of genetics and the fossil record, points to the fact that God created thousands of pairs of basic types in the beginning, each of which possessed the genetic information and flexibility to produce wide variety in its offspring depending on its environment and location. Selective breeding by humans and genetic mutation have also contributed to variation. Chihuahuas, Terriers and Pekinese all have a mutation in the gene for an important growth regulator (IGF1) which results in less production. Whippets with one mutated copy of the myostatin (MTSN) gene and one normal copy end up being more muscled than normal whippets and consequently can run faster. Thus creation scientists do not believe that God created all the species exactly as we see them today.4

The differences between Chihuahuas and Great Danes are of a different kind altogether to the differences between classes like mammals, reptiles, fish, amphibians and birds. (Which is why they were classified as different classes in the first place). Each class possesses a number of unique defining characteristics which are not found in any other class. The evolution of mammals from reptilian type ancestors would require the development of new features such as mammary glands and a milk supply, a hair covering, a temperature control system, a corti, a diaphragm and a fourth chamber in the heart. Is this kind of change possible by random mutation and natural selection? Sadly for Darwinists the answer is no. Why? There are too many genetic obstacles in the way, even given vast ages of time.

Since mutations are almost always harmful, a major function of DNA is to resist mutation, not facilitate it. In a Darwinian world every single mutation must be advantageous or it will be quickly weeded out. The science literature is replete with discussions of the many obstacles to mutation-based evolution, from a too slow mutation rate to the fact that mutations are often recessive and prevailed against by dominant genes in reproduction. Then there’s the problem of information. Just as turning a single short telegram message into an Encyclopaedia would demand the introduction of thousands of intelligent grammatically correct sentences, so evolving new biological organs and systems demands a huge gain in complex genetic information. By ‘information’ scientists mean novel, meaningful sequences of DNA. Yet, no mutation known to man has ever led to an increase in such genetic information.

Probably the gravest problem with the neo-Darwinian theory – that mutations naturally selected have built all of nature – is the simple fact that such a theory ignores what Michael Behe calls the ‘edge of evolution’. Behe is Professor of Biological Sciences at Lehigh University in Pennsylvania. In addition to publishing over 35 articles in refereed biochemical journals, he has written editorial features in Boston Review, The American Spectator, and The New York Times. His book, Darwin’s Black Box, has sold over 250,000 copies and has been called one of the 100 most influential books of the 20th century. Behe points out in his second book, The Edge of Evolution (Free Press, New York, 2007), that newly available genetic data on humans and on our microbial parasites (malaria, HIV, E.coli) allows us to give a scientific answer to the question, “Based on hard empirical data, what can Darwinian evolutionary processes actually do?” The answer? Astonishingly, even under intense selective pressure, and given an astronomical number of opportunities, random mutation and natural selection yield only trivial, mostly degenerative, changes. For example, a random mutation in the malarial parasite can explain its development of resistance to chloroquine, but only because it has a huge population and a short life-cycle. That won’t work for large, complex creatures with smaller populations and longer generations.

Not that it hasn’t been tried. Eminent evolutionary geneticist Richard Goldschmidt bred gypsy moths for 20 years and a million generations. All he ever produced were gypsy moths. Famed American plant breeder Luther Burbank admitted that though he could breed a plum anywhere from ½” to 2½” long (1.3cm to 6.3cm), he could neither go as small as a pea nor as big as a grapefruit. As biology Professor Lane Lester (PhD in genetics) and Ray Bohlin (PhD in molecular biology) have observed, “Natural selection, recombination, mutation and speciation can all interact in concert to bring about startling variation within the created prototype [kind]…but there are limits to biological change.”5

All of this goes to show that the Bible’s ancient claim that plants and animals reproduce only ‘after their kind’ stands as a scientifically sound statement, provided we understand that being in the same ‘created kind’ means descending from the same ancestral gene pool. However, Darwin’s claim that all of life, including humans, came from a single-celled organism in a little warm pond millions of years ago by nothing more than accidental mutations selected by nature, collapses through lack of evidence.

1. The effects of selective dog breeding remain an important icon of neo-Darwinism. While it is true that turning some existing genes or regulatory elements on or off, or changing them slightly by simple, single mutations, can certainly affect the shapes and other properties of dogs to a degree, that does not explain where the complex systems controlling the dogs’ development came from in the first place. Furthermore, these types of genetic changes are of a wholly different kind than is needed for bacterium-to-Beethoven style evolution.
2. Charles Darwin, On the Origin of Species, (London, Penguin Classics, 1985), p. 292
3. Ernst Mayr, Science, June 2, 1972 p. 981
4. http://www.creationontheweb.com/content/view/271
5. Lane Lester & Raymond Bohlin, The Natural Limits To Biological Change (Dallas, Probe Books, 1989), p. 175-6, 14