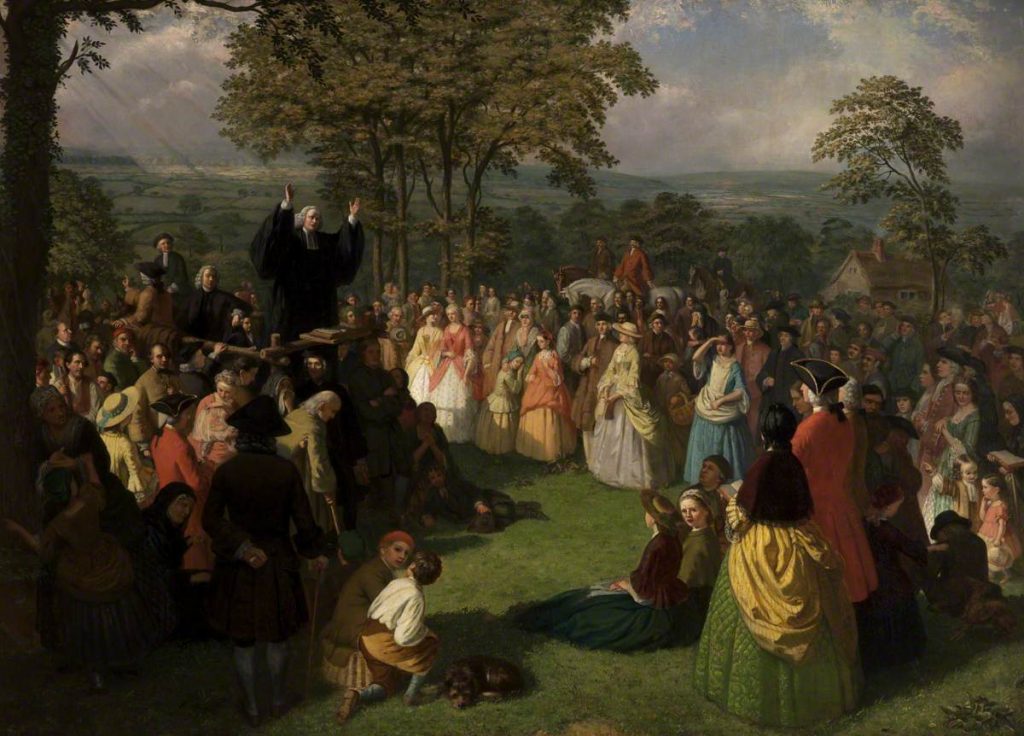 Of George Whitefield (1714-1770) a hearer reported: “I found him standing on a table-board…with his hands and eyes lifted up to heaven in prayer; he prayed with uncommon fervency, fluency and variety of proper expressions. He then preached about an hour in such a manner as I scarce ever heard any man preach. Though I have heard many a finer sermon, according to common taste…I never heard any man discover such evident signs of a vehement desire, or labour so earnestly to convince his hearers that they were all by nature in a sinful, lost, undone state. He showed how great a change a faith in Christ would produce in the whole man. With uncommon fervour he acquitted himself as an ambassador of Christ, beseeching them in His name…to be reconciled to God. Although he used no notes nor had anything in his hand but a Bible, yet he delivered his thoughts in a rich copious variety of expression, and with so much propriety, that I could not observe anything incoherent…through the whole performance.”

John Bunyan (1628-1688) writing in Pilgrim’s Progress describes his character, named Christian, in the ‘house of the interpreter’ where he sees the picture of “a very grave person” – the preacher of the gospel – with “eyes lifted up to heaven, the best of books in his hand, the law of truth written upon his lips, the world behind his back. He stood as if he pleaded with men, and a crown of gold hung over his head.”

Gardiner Spring (1785-1873) in The Power of the Pulpit says: “He (the preacher) must feel his subject. It is as marvellous as it is mournful, that the weighty and thrilling truths of God’s word lose so much of their force from the little interest the preacher himself feels in his theme. George Whitefield was probably the most remarkable man in this respect, whom the world has seen. Rich as his discourses were, they do not compare with the discourses of some other preachers in richness of thought. But in intensity of feeling, he had no equal. He enchained his auditory by his intense interest in his subject. A ship-carpenter once remarked that he could usually “build a ship from stem to stern, during the sermons, but under Mr. Whitfield he could not lay a single plank“. It is of themselves that ministers should frequently complain, rather than of their hearers; it is they who are cold and inanimate…No preacher can sustain the attention of a people unless he feels his subject; nor can he long sustain it, unless he feels it deeply. If he would make others solemn, he himself must be solemn; he must have fellowship with the truths he utters. He must preach as though he were under the eye of God, and as if his own soul were bound up in the souls of those who hear him. He must preach as though he were in sight of the cross, and heard the groans of the mighty sufferer of Calvary; as though the judgment were set, and the books opened; as though the sentence were just about to be passed which decided the destinies of men; as though he had been looking into the pit of despair, as well as drawing aside the veil, and taking a view of unutterable glory.”