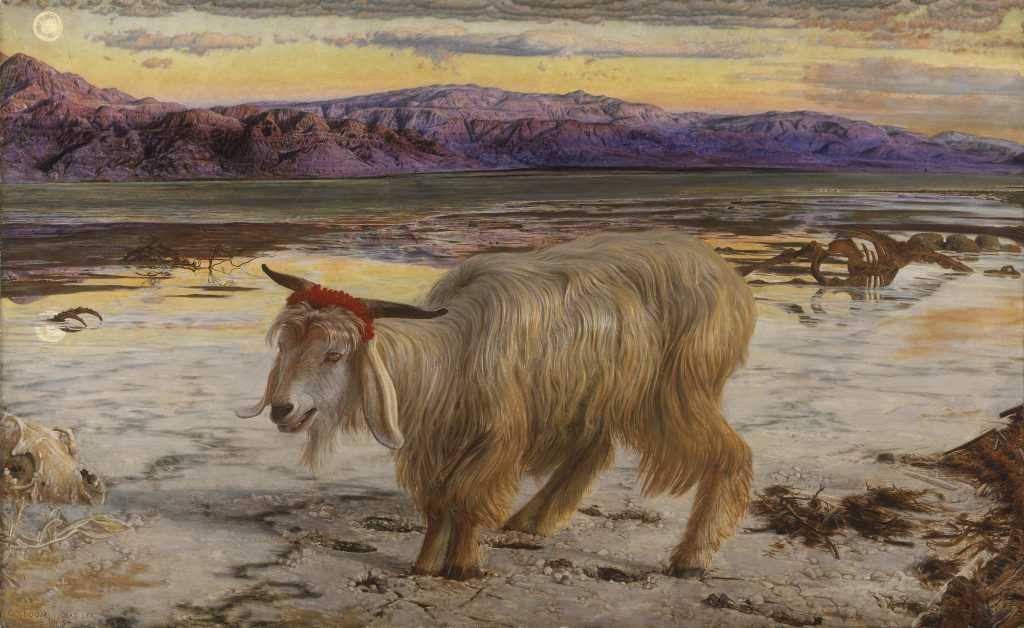 The Scapegoat, by William Holman Hunt, 1854

This poem was written some time after 1883, when William Blane emigrated from Scotland to South Africa. It first appeared in print in 1887, when William Shaw, of Maybole in Ayrshire, had it printed in Scotland as a penny pamphlet. Advertising it in a magazine of which he was the editor, Shaw described it as a ‘new poem’ (The Believer’s Treasury, Dec 1887, p. 191.).

The Atonement was no business act in which the Saviour did contract
To undergo so many pains that He might cleanse so many’s stains.
He gave His all – His life’s blood flowed to reconcile the world to God.
‘Twixt God and man, to close the rent, the spotless Lamb of God was sent.
If all the sins of Adam’s race, with perfect justice to each case,
In Heaven’s balances were laid, they would be utterly outweighed
By Jesus’ death. The value lies all in the infinite sacrifice;
When Christ for man was crucified, the Creator for the creature died…

What means a universal call if there be not enough for all?
As if the Saviour passed some by while He for others’ sins did die,
And that, though all are told to come, there’s but provision made for some;
Or that in some mysterious way God means not what the Scriptures say.
Let hampered minds their thoughts expand, nor on such narrow footing stand;
The mighty  work of Jesus scan – He “tasted death for every man”.
He “died for all”, that they who live back to Himself that life should give.
He has for “all” atonement made; for all mankind the ransom paid.
God loved the world; and when He gave His Son, it was the world to save.
And though He knew some would not take of the provision He would make,
The foreseen choice of self willed man changed not heaven’s universal plan,
As, in the love that moved His heart, all in the atonement had a part.
Some will be lost, and rescued some, yet “Whosoever will may come.”
If not, He only mocks their fate who presses all, “ere ’tis too late”,
To trust a work not for them done, to take a pardon while there’s none,
To fly from hell without a way, or perish if they disobey.
They never can the sinner reach who, crippled thus, the gospel preach.
‘Tis he who knows of food for all that only can afford to call
A hungry world to come and feed – all others would but mock their need.
O tell the tidings all around, that every soul may hear the sound-
The atoning work embraces all who were enveloped in the Fall.
To earth’s remotest regions go, and preach to every child of woe,
Impartial who or what they be – the rich, the poor, the bond, the free,
That Christ on their behalf has died that God with Him is satisfied,
And now is ready to forgive – the simple terms, “believe and live”.
And he who disregards the news, and doth his day of grace abuse,
Shall find the worm that never dies, as in the burning lake his sighs
To all eternity, shall be – “There was provision made for me:
I might have been in heaven above, but I despised God’s mighty love.”