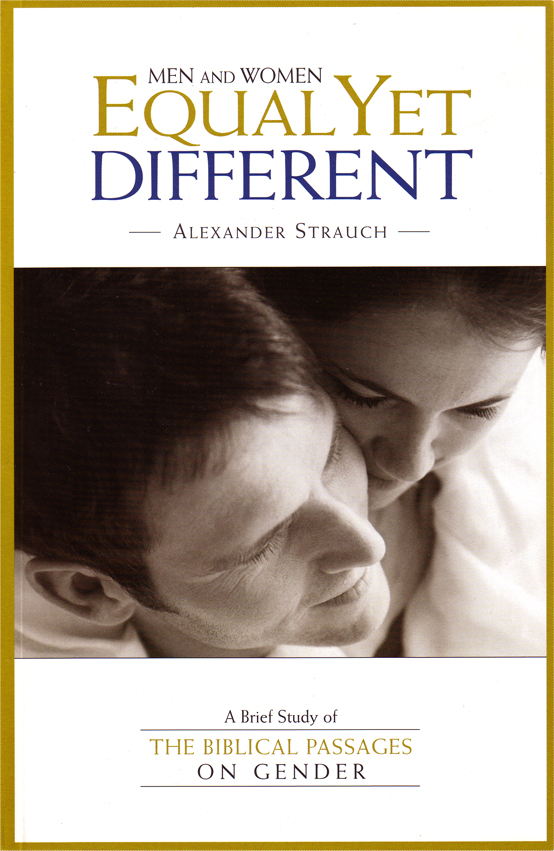 The nature of the relationship between men and women is a massive, live, hot button issue. We live in the era of 4th wave feminism and the “Me-too movement”. The media is awash with discussions of patriarchy, male privilege, the gender pay gap, gender equality, gender stereotypes, female empowerment and much more.

The two leading worldviews vying for our attention are complementarianism on the one hand, and egalitarianism on the other. What you believe on this issue affects most areas of life – courtship, engagement, marriage, the home, the family, child rearing, dress, surnames, the workplace, the local church and society in general, to name a few!

Alexander Strauch’s book Equal but Different (9780936083162) is a cracking little volume that covers all the bases and powerfully and cogently defends the Biblical truth of “headship”, otherwise known as “complementarianism”. It is a very manageable 126 page volume containing 95% Scripture exposition.

Mr Strauch begins by examining the record of the first 3 chapters of Genesis. He proves that complementarianism was God’s original plan (pre-fall). God created two permanent fixed genders/sexes (male and female). While making Adam and Eve equal in person, value and worth, He assigned to them different but complementary roles. Adam was to be head; Even to be helper. Man to be father, husband, protector and provider. Women to be wife, mother, nurturer and home-maker.

Strauch correctly pins the blame for the “battle of the sexes” on the entrance of sin into the world in Genesis 3. This means that the answer to the problem is not “feminism” – eradicate roles and abolish marriage – but a return to the Biblical pattern of headship, based on the example of Christ in His headship over and love for the church, and enabled by the indwelling of the Holy Spirit in redeemed men and women who are guided by the complementarian teachings of the word of God.

Strauch outlines the teachings, example and choices of Christ in the gospels, and well as working his way through the 7 major complementarian passages of the New Testament. He helpfully expounds the meaning of 4 critical words: 1. helper (Hebrew: ‘ezer); 2. be submissive (Greek: hupotasso); 3. head (Greek: kephale); and 4. exercise authority (Greek: authenteo). He proves conclusively that “head” does not mean “source”. To be someone’s head is to have authority over them and to be responsible for their welfare. He examines the issue of submission and proves that it is always one way and never reversible. He looks at the crucial verse in Gal 3:28 which says in Christ there is neither “male nor female” and exposes the wrong-headed handling of this verse by evangelical feminists. He also deals with the fact the in the Bible God is always a He, and never a she; always a father and never a mother.

I have read “God’s Design for Man and Woman” by the Kostenbergers, and have gone through a lot of Wayne Grudem’s material on “Biblical Manhood and Womanhood”, but Strauch’s book is hard to beat. I would highly recommend it as sound, scriptural, enlightening and convincing.

Alexander Strauch is an author and Bible teacher from Colorado, USA, and is married with two daughters. He is best known for his books on “Biblical Eldership”.