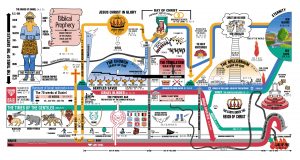 In chapter 20 of his classic work From Eternity to Eternity (Paternoster Press, 1954), Eric Sauer includes an impeccably argued passage in which he addresses the importance of taking literally the Bible’s prophecies of a future Millennial kingdom of God on earth. His analysis will repay careful reading:

“The expectation of a visible kingdom of God on the theatre of this earth is evident in the Old and New Testaments. In a hundred places it is the subject. To “spiritualize” them all is contrary to accurate exegesis. The promises of the first coming of Christ were fulfilled literally. Christ came literally from Bethlehem (Mic 5:2), rode literally on a donkey into Jerusalem (Zech 9:9), was literally betrayed for thirty pieces of silver (Zech 11:12), and on the cross was literally pierced in hands and feet (Psa 22:16). They literally cast lots for His garments (Psa 22:18), literally His bones were not broken (Psa 34:20) and literally His side was pierced by a spear (Zech 12:10).

“Combined with these prophecies of the first coming, there often stand in the very same sentence prophecies of the second coming, and by the plain meaning of the words, and by their later fulfillment in the life of Jesus of Nazareth, it is evident that the first part of such sentences is to be taken literally. Who therefore can justify the taking merely “spiritually” of the second part of one and the same sentence (e.g. Luke 1:31-33)? Who gives us the right to take Jews to mean Christians, Jerusalem to mean now only the church, and Canaan heaven? No, the “spiritualizing” of these promises of the Messianic kingdom, and a transference of them to some other corporate system, were nothing else than a veiled breach of covenant by God as regards Israel. But this is impossible.

“It is quite evident that the Old Testament prophets expected above all else a spiritual renewing and conversion of Israel (Zech 13:1, Ezek 36:26, Isa 4:4); to which in the New Testament Paul especially refers (2 Cor 3:16, Rom 11:24-26); and it is likewise true that they announced a spiritual renewing of the nations (Zeph 3:9, Isa 2:4 etc.). But equally plainly, in statements completely beyond misunderstanding, numerous prophecies announced for the end-times also a return of Israel to the land of their fathers and a national and territorial reinstatement (Isa 11:11 etc.).

“In plain words, which admit of no other possible explanation, they declare that for the Messianic end-time they expected a reuniting of the two-tribed kingdom with the ten-tribed kingdom, and the sovereignty of the Messiah over the whole twelve-tribed people in a single proper civil institution and in racial national unity (Ezek 37:15-25).

“With indisputable clarity they proclaim it as a divine message that those who had been scattered to all quarters of the world would be brought back, and this to their own land (Ezek 28:25), to the land of their fathers (Jer 16:15), this land (Jer 32:41), the land of Israel (Ezek 11:17), in Gilead and on Lebanon. These terms can mean only the well known geographical area in Western Asia in which Israel formerly dwelt and which is unmistakably indicated by these unequivocal expressions (Zech 10:10).

“They further declare that the central place of worship will be in Jerusalem. And not indeed for Israel alone, but also for the renewed nations (Isa 2:1-3, 27:13, Zech 14:16), and that from this renewed people of God, Israel, dwelling in the Holy Land, there will go forth powerful influences upon the nations (Mic 4:1-4, 5:8, Zech 12:6). It were no difficult task to multiply these proofs. Sound exegesis cannot overlook this Old Testament prophetic expectation of an earthly, territorial, national restoration of Israel. But all of these prophecies do not apply to unconverted Israel, but only to the at last spiritually renewed Israel believing upon Messiah.

“Similarly it is undeniable that the Revelation of John expects a kingdom of God that lies between the appearing of the Lord in glory and the proper renewing of the universe. For, first in chapter 19, it speaks of a return of Christ as the glorious Victor, who, accompanied by hosts of angels, descends from the opened heaven, breaks His foes to pieces, and as King of kings and Lord of lords displays His conquering power. Only after this, in the beginning and middle of chapter 20, it speaks of the kingdom of the thousand years (20:3-7), which it thus quite plainly sets forth as a consequence of the victory so pictured; and not till then, at the end of chapter 20, and in chapter 21, after the catastrophic final events, does it speak of the great white throne, of world collapse, world transfiguration, and world renewing (20:11-15, 21).

“…all the words of prophecy must find their fulfillment. They must be fulfilled literally, actually, completely, and in the same sense in which they were meant originally. The fact that, in addition to this, God often fulfills a prophecy in a still higher, spiritual, eternal degree, surpassing the Spirit-given wording of the message and the understanding of even the prophet himself, is no proof that thereby the original, literal meaning is dissolved and that the expectations, as far as God himself through this inspired prophet has evoked them, will ever be disappointed. No, God, the Eternal, Unchangeable and Faithful One, always keeps His word, and does this in the same sense as He first gave it. But it is His abounding grace that frequently He surpasses that meaning, and surprises expectant faith by the unfolding of greater blessings first indeed hidden, but already from the beginning immanent, and in their final display infinitely richer. “The gifts of grace and the call of God are beyond recall” (Rom 11:29).”

5. The God-given inspired interpretation of the dream visions in the book of Daniel. Speaking of the “kingdom of the Son of man” which follows the four Wild Beast empires of man’s previous history, it says: “Then will the kingdom and the authority and the dominion over the kingdoms under the whole heaven be given to the people of the saints of the Most High” (Dan 7:27). Also the dream vision of Nebuchadnezzar declares that the stone which shatters the feet of the imperial image finally becomes a great mountain which “fills the whole earth”, so that the kingdom of God occupies the whole area which the kingdoms of the world together had formerly occupied (Dan 2:35, 38-39).

6. The unmistakable answer of the Lord Jesus at His disciples when they asked “Lord, dost Thou at this time restore the kingdom to Israel?” (Acts 1:6). He did not reprove them for earthly or even fleshly conceptions, nor deny the coming of a visible kingdom of God such as they had in mind, but said only, “It is not for you to know the times and the seasons, which the Father has set in His own authority.” Thus He did not reject their expectation of a visible earthly kingdom but only their curiosity and impatience in this expectation. By this His prophetic term “times and seasons”, the Lord Himself testified that in due time the kingdom of Israel will in fact be established.

7. The testimony of the Revelation of John. It is wholly incontestable that here there is mention of a Millennial kingdom which is placed after the return of Christ in glory and before the destruction of the universe (Rev 19:11-21, 20:4-6, 9-11) which therefore – this is the unmistakable meaning of the sacred writer himself – will be set up in the End time as an intermediate kingdom, between the parousia and world transfiguration, and on the theatre of this old earth.