Hair: How Long is Long? How Short is Short?

Guess who said: “There they were in America [in the early 1960’s] all getting house-trained for adulthood with their indisputable principle of life: short hair equals men, long hair equals women. Well, we got rid of that small convention for them”? 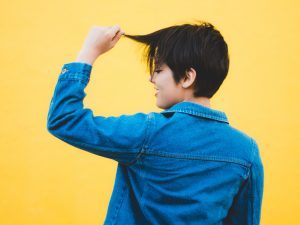 Of course, we’ve come a long way since the 1960’s. Ours is the era of the ‘man-bun’ and the androgynous hairstyle.2 So, what should the Bible-believing Christian do in such a culture? How short is short for men? How long is long for women?

Walter A. Boyd writes clearly and helpfully on this topic:3

“At creation, God implanted within man and woman an appropriate sense of what is right and wrong.  Romans 1:26-27 is a parallel passage, presenting a similar concept of what is right and wrong being identified by our nature as imprinted by the finger of God in creation. There is something equally repulsive to nature about both long hair on a man and shorn or shaven hair on a woman. For a woman to wear her hair long, in a womanly manner, is an outward sign that she is fulfilling her role in creation. Similarly, for a man to wear his hair short in a manly way, is to fulfil his role in creation. How men or women wear their hair is an outward indication of whether they are abiding in their created order.”

He continues: “In the section where he appeals to comeliness, Paul then introduces the subject of hair, which is closely associated with the head covering (vvs 14-15). This links back to vvs 5-6 where Paul speaks about the shame for a woman of being shaved or shorn. The ‘shame’ and ‘dishonour’ of vvs 5-6 should be understood in light of what he states here in vvs 14-15. Paul asks a rhetorical question regarding the order of things in the natural realm. He asks them to consider that, since the man wears his hair short and the woman has long hair as a natural covering, is it not the case that nature is teaching that a man should be without a covering, and woman with a covering in the assembly?  The question is posed and worded in such a way as to suggest an affirmative answer.

“When Paul speaks about nature, he is referring to the way things are done naturally in society.  He is not saying that physiologically a man’s hair is short and a woman’s long: he means that men cut their hair short and woman leave their hair long. This is not to say that the woman can dispense with the head covering; but rather that, since she already has a covering supplied for the natural realm, she should wear a head covering in the spiritual realm. Looking back, the argument of v.6 now becomes clearer: if she refuses to wear a head covering in the spiritual realm, then let her be consistent in her actions and go without a covering in the natural realm by shearing or shaving off her hair! The implication is that no woman would ever think of doing such an outrageous thing against the very order of nature, as shearing or shaving off her hair. So why do something more serious in the spiritual sphere by removing her headcovering?

“In vvs 5-6, the shame and dishonour of the woman is by either shearing or shaving off her hair; whereas, in v15, it is a question of long hair as a glory (the opposite of shame). There has been much discussion around this subject over many years. The only way to resolve the questions is to approach the matter in a spirit of willing obedience to Scripture by asking “what does the text say?” and “am I willing to obey it?” V15 helps to explain v14, so we will start there.  In v15 it is a glory to a woman to have long hair. Some argue that the word “long” is defined as uncut, or hair at its natural length whatever number of inches that may be. A clearer way to arrive at the interpretation of the verse is to allow the opposite to help us to understand what “long” means. What is the opposite of long? In the context of this passage, it is to shear or shave. How much hair is shorn or shaven is not stated. Many think that the old question “how long is long?” stumps the thoughtful interpreter of 1 Cor 11. Again, we should allow the passage to speak for itself. Putting vvs 14-15 alongside verses vvs 5-6, it shows that long hair is hair that has not been shorn or shaven. No amount of clever reasoning or evasive questioning will alter the implications of the apostle’s argument: hair that has been shaven or shorn is not long, and is a shame. This is the opposite of what brings glory to the woman. In light in Paul’s argument, it is not satisfactory to say that it is enough for the woman’s hair to be sufficiently long to show her femininity and distinguish her from the man. The passage is not about the demonstration of masculinity and femininity; it is about the demonstration of submission to the roles of male and female in headship. This is borne out by the fact that two different words are used for shear and shave. To shear (Strong’s 2751) is to use shears to cut off. To shave (Strong’s 3587) is to use a razor to shave the hair or beard.

“Nothing in this should be taken to imply that there is shame for a sister who loses her hair through either illness or its treatment, or some unusual natural occurrence, or for a sister whose physiological features includes hair that doesn’t grow as long as some others. Nor would any but an extreme legalist infer fault on a sister who trimmed the ends of her long hair to maintain it in a good healthy condition. Likewise, only one wanting to take liberties with the Word of God will use the excuse of “healthy trimming” to have hair that is obviously not long.

“The summing up of the apostle Paul in this verse is very weighty and solemn.  He is pointing out that what he is teaching is not some new thing among the assemblies, or something that isn’t taught in other assemblies. He is stating that what he has taught on headcovering and hair is the universal principle and practice among the local assemblies of God. In setting forth the arguments from Christology, creation, and comeliness, he is not appealing to any particular culture, but shows that these doctrinal arguments form the norm for every assembly in every culture, in every period of this dispensation. This was not something he had made up by himself: it was Apostolic tradition handed down to the assemblies. That makes it a very solemn thing to set aside what Paul has taught: it amounts to disobedience!”