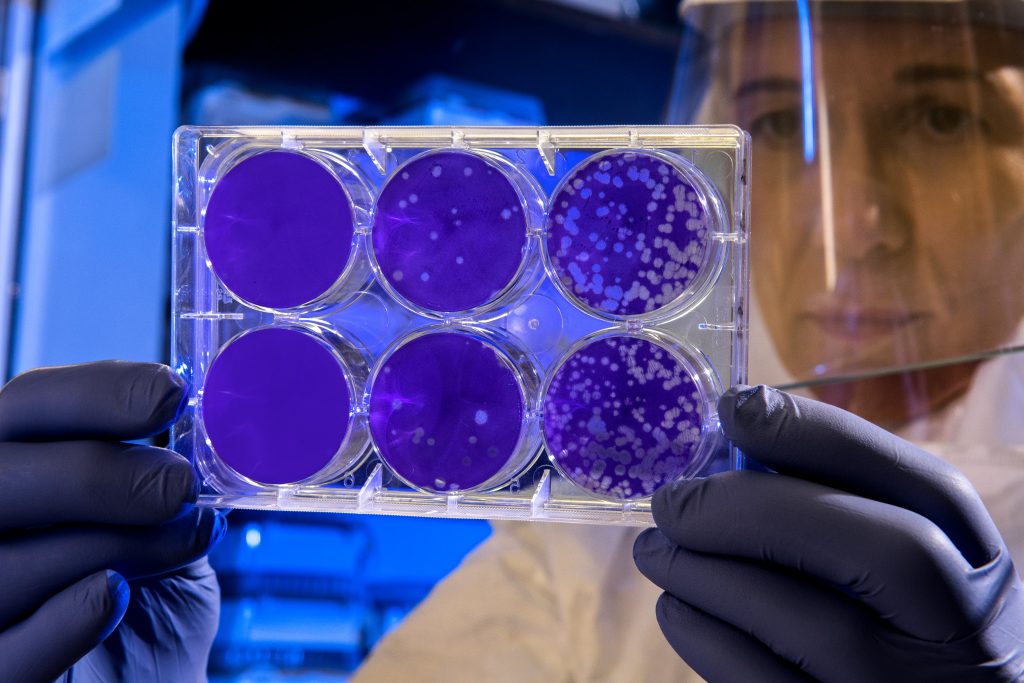 Imagine finding a package of magic seeds that, depending on where you planted them, could grow into celery, carrots, cabbage, or corn. Stem cells resemble such seeds. Stem cells are master cells that can give rise to all of the 210 different types of tissue found in our bodies. These multi-talented cells are currently the hottest topic in medicine. Through careful engineering, stem cells could be used to repair a damaged brain or heart, rebuild a knee, restore injured nervous system connections, treat diabetes, and much more.

In fact, stem cell therapy is already widely used in some cancers and autoimmune diseases. Over 20,000 times a year in the United States alone, bone-marrow derived stem cells are used to replace a patient’s bone marrow after chemotherapy or radiation, resulting in many once-unattainable cures. In a typical case, doctors first isolate stem cells from a cancer patient’s bone marrow. Then they treat the patient with high-dose chemotherapy in order to kill off the tumour cells. If not for the harvested stem cells, however, this treatment would be lethal, because just as the drugs kill tumour cells, they also wipe out the blood-forming cells still in the bone marrow. But just in time, the physicians reintroduce the stem cells into the patient, and in a short time these cells repopulate the bone marrow with all of the cellular machinery needed for normal blood formation.

Bone marrow replacement is one example of the ethical use of stem cells, because these cells are derived from the patient’s own body with his consent. Stem cells can also be obtained ethically from umbilical cord blood and from placentas. Current preliminary research in animals and humans has shown that these cells may soon be used to treat diseases such as juvenile diabetes, multiple sclerosis, Parkinson’s disease, strokes, and heart attacks.

The Bible clearly teaches that human life begins at conception, and thus embryonic stem cell “harvesting” breaks the commandment, “Thou shalt not kill” (Exod 20:13). The Holy Spirit clearly shows His view of unborn children by the words He chose for them in Scripture. When recording the origin of people, He usually chose the word “begat”, which refers to conception (e.g. Gen 5:3). In addition, He used the Hebrew yeled and the Greek brephos (words meaning “child”) for both born and unborn children (compare Exod 21:4 with 21:22, and Luke 1:41 with Acts 7:19). Thus the Bible regards born and unborn children the same. David marveled at how God “fearfully and wonderfully” crafted him in the womb, and there framed every day of his future (Psa 139:13-16).

Job, Isaiah, and Jeremiah also describe how God fashioned their bodies and ordained their destinies before they were born (Job 10:8-12; Isa 49:1-5; Jer 1:4-5). While David was in the womb, God knew him as a person. Before birth, God considered Job alive, called Isaiah His servant, and ordained Jeremiah as His prophet. We must also remember that the Incarnation occurred in Nazareth, not Bethlehem: “Thou art He that took Me out of the womb; Thou didst make Me hope when I was upon My mother’s breasts, I was cast upon Thee from the womb; Thou art My God from My mother’s belly” (Psa 22:9-10).

The Law of Moses further shows this truth by valuing the life of the unborn as greatly as the life of an adult. For example, Exodus 21:22-23 observes that if either of two men fighting each other struck a pregnant woman, she might go into labour prematurely. If she did, and no harm came, the law still levied a stiff fine. But if the man hurt either the mother or her unborn baby, then the “eye for eye, tooth for tooth” principle applied; and if either died, then “life for life” demanded the offender’s death. This Scripture puts the mother and her unborn baby on equal footing: the murder of either person was a capital offence.

While recognising the personhood of embryos, some have nevertheless argued that we should sacrifice a few embryos to advance medical science, because “they’re going to be destroyed anyway.” But this utilitarian “end justifies the means” thinking is unscriptural. Killing an innocent human being to alleviate the suffering of another is an immoral way of achieving this end. Evil means are never justified, no matter how desirable the end. Adding a wrong to a wrong does not subtract the first wrong – it simply adds another wrong to it, compounding evil. So the fact that an elective abortion has already occurred does not mean that we can justify the additional wrong of experimenting with the live aborted baby or his tissues – regardless of the information that may be gained from it.

The topic of embryonic stem cell research, like other contemporary moral debates, will test and challenge our understanding of biblical ethics. All ethical systems belong in one of two camps. The first is from above, revealed ethics, a system of behavior from God; the second is from below, speculative ethics, the product of mere human reasoning. The first depends on divine authority, the second on human preference. The first is absolute, the second relative. The first acknowledges God, the second rebels against Him. To summarise the biblical view:

1. Christian Ethics is Based on God’s Will. God wills what is right based on His own unchanging moral character, and He instructs us to obey His will. “Be ye holy, for I am holy” (Lev 11:45). “Be perfect, therefore, as your heavenly Father is perfect” (Matt 5:48).

2. Christian Ethics is Absolute. God’s moral character never changes (Mal 3:6; Jas 1:17), so moral obligations flowing from His nature are absolute. Imperatives like holiness, justice, love, truthfulness, and mercy are binding for everyone, everywhere, all the time.

3. Christian Ethics is based on Divine Revelation. God has revealed His commands both through general revelation in nature (Rom 1:19-20; 2:12-15; Psa 19:1-6) and special revelation in Scripture (Rom 2:18; 3:2; Psa 19:7-14). General revelation contains God’s commands for all people; special revelation declares His will for believers. Although unbelievers may not know the Scriptural basis of morality, they show by their inclinations that the law is written in their hearts (Rom 2:14-15). God will exonerate no one for failing to recognise Him as the source of moral duty.

Thus the Scripture judges an action as moral or immoral by whether it conforms to the divine standard of goodness. An act that fails to produce an intended result may still be good, because moral actions that reflect God’s nature are good whether they succeed or not.

Beyond the taking of human life, embryonic stem cell research poses a further ethical problem. Even if such research could result in beneficial cell therapies, a patient’s immune system would see those implanted cells as “foreign” and would reject them. The only way to avoid this problem would be first to clone the patient by inserting his genetic material into a donated egg. This clone – essentially the patient’s identical twin – would then be grown in a laboratory dish to a certain stage, and then killed in order to harvest its stem cells for the patient’s use. So embryonic stem cell therapy will inevitably add human cloning, which is unethical and immoral in its own right, to the sin of destroying human life.

Why is human cloning wrong? Did not God give man dominion over His creation (Gen 1:27-28). Yes He did, and this encourages us to unlock the secrets of the biological world and harness them for our benefit (Jer 31:35-36; 33:20-21). However, we must exercise our dominion responsibly, for we are merely stewards of God’s creation (Lev 25:23). God is sovereign over life. He created every living thing (Gen 1:21), and He controls both life and death (Deut 32:39; Job 1:21). We are not our own, but His by creation and by redemption (1 Cor 6:20). Therefore we have no right to seek control of human life, to tinker with its genetics, or to advance its “evolution”.

Just because something is technically possible does not mean that it is morally permissible. Scientific progress has acquired a hubris, which dictates that whatever scientists can invent, they should invent. In fact, technological progress is not necessarily ethical progress – it may instead be ethical regress. We have the technology to destroy the human race with nuclear warheads, but that does not mean that we should ever do so.

We are in danger of forgetting the bitter lessons learned at Nuremberg after World War 2. At the Auschwitz camp, 12,000 Jews and other untermenschen (undesirables) were dying each day. As well, 14,000 lbs of women’s hair was found woven into gunny sacks to be sold in the market. During the Nuremberg war crime trials, German researchers on trial (most notably the Waffen SS member Dr. Josef Mengele at Auschwitz) defended themselves on the following grounds:

1. A great need allegedly existed for the research to save the lives of soldiers and sailors.

2. The subjects of the experiments were purportedly already targeted to die (i.e., German researchers alleged that someone else made the decision to kill them).

3. Therefore, we should not let this valuable commodity, this chance to learn in ways we otherwise could not, be wasted.

This argument, resoundingly rejected by the tribunal, is precisely the same argument put forward today to justify using government funds to conduct research on human embryos. The only difference is that we have substituted human embryos as the group of devalued, commodified human beings who are to be sacrificed on the altar of research and supposed progress.

So the proper use of science demands that each new research project begin with a moral basis. The Christian might therefore echo the words of President Bush, who has halted the further harvesting of embryonic cells in the US, and has weathered much abuse for his life-honoring views: “While we must devote enormous energy to conquering disease, it is equally important that we pay attention to the moral concerns raised by the new frontier of human embryo stem cell research. Even the most noble ends do not justify any means.”

Originally published in Truth and Tidings magazine. Used with permission.