What Happened to the City that Crucified Christ? (AD70) 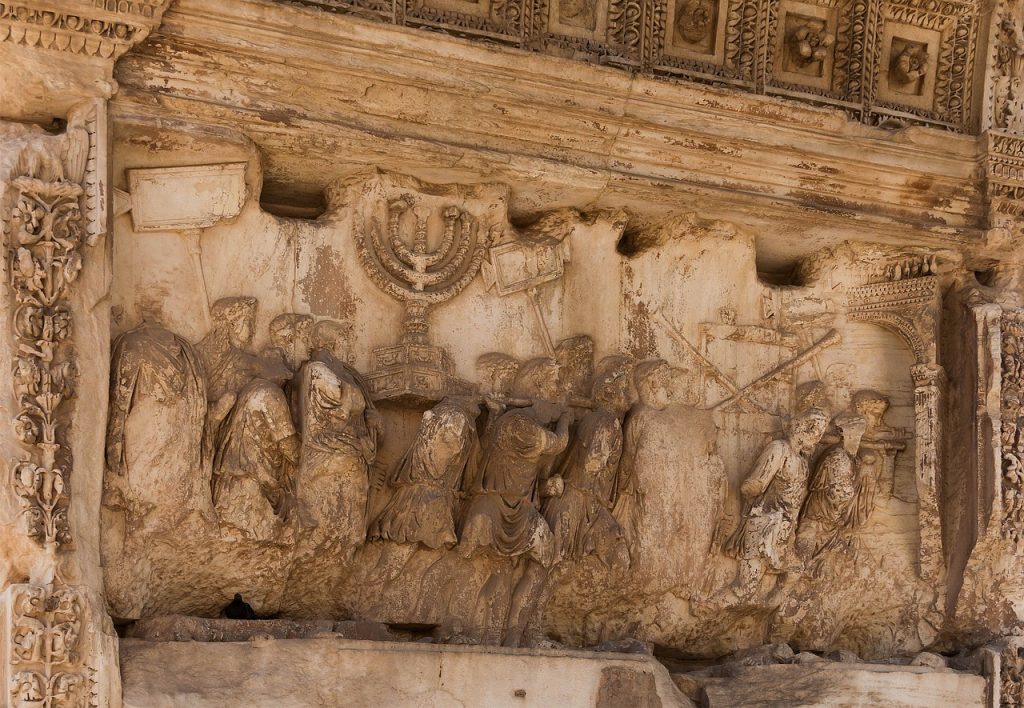 AD70’s events depicted on the Arch of Titus in Rome

What Happened to the City that Crucified Christ?

In his Life of Christ, Dean Farrar describes the events of AD70 in a memorable passage that reveals just how literally the prophesied judgment fell:

“‘Behold, your house is left unto you desolate!’ And has not that denunciation been fearfully fulfilled? Who does not catch an echo of it in the language of Tacitus – ‘Expassac repente delubri fores, et audita major humana vox excedere Deos.’ Speaking of the murder of the younger Hanan, and other eminent nobles and hierarchs, Josephus says, ‘I cannot but think that it was because God had doomed this city to destruction as a polluted city, and was resolved to purge His sanctuary by fire, that He cut off these their great defenders and well-wishers; while those that a little before had worn the sacred garments and presided over the public worship, and had been esteemed venerable by those that dwelt in the whole habitable earth, were cast out naked, and seen to be the food of dogs and wild beasts.

“Never was a narrative more full of horrors, frenzies, unspeakable degradations, and overwhelming miseries than is the history of the siege of Jerusalem. Never was any prophecy more closely, more terribly, more overwhelmingly fulfilled than this of Christ. The men going about in the disguise of women with swords concealed under their robes; the rival outrages and infamies of John and Simon; the priests struck by darts from the upper court of the Temple, and falling slain by their own sacrifices; ‘the blood of all sorts of dead carcasses – priests, strangers, profane – standing in lakes in the holy courts’; the corpses themselves lying in piles and mounds on the very altar slopes; the fires feeding luxuriously on cedar-work overlaid with gold; friend and foe trampled to death on the gleaming mosaics in promiscuous carnage; priests, swollen with hunger, leaping madly into the devouring flames, till at last those flames had done their work, and what had been the Temple of Jerusalem, the beautiful and holy House of God, was a heap of ghastly ruin, where the burning embers were half-slaked in pools of gore.

“And did not all the righteous blood shed upon the earth since the days of Abel come upon that generation? Did not many of that generation survive to witness and feel the unutterable horrors which Josephus tells? – to see their fellows crucified in jest, ‘some one way, and some another’ till ‘room was wanting for the crosses, and crosses for the carcasses?’ – to experience the ‘deep silence’ and the kind of deadly night which seized upon the city in the intervals of rage? – to see 600,000 dead bodies carried out of the gates? – to see friends fighting madly for grass and nettles, and the refuse of the drains? – to see the bloody zealots ‘gaping for want, and stumbling and staggering along like mad dogs?’ – to hear the horrid tale of the miserable mother who, in the pangs of famine, had devoured her own child? – to be sold for slaves in such multitudes that at last none would buy them? – to see the streets running with blood, and the ‘fire of burning houses quenched in the blood of their defenders?’ – to have their young sons sold in hundreds, or exposed in the amphitheatre to the sword of the gladiator or the fury of the lion, until at last, ‘since the people were now slain, the Holy House burnt down, and the city in flames, there was nothing farther left for the enemy to do?’

“In that awful siege it is believed that there perished 1,100,000 men, beside the 97,000 who were carried captive, and most of whom perished subsequently in the arena or the mine; and it was an awful thing to feel, as some of the survivors and eye-witnesses – and they not Christians – did feel, that ‘the city had deserved its overthrow by producing a generation of men who were the causes of its misfortunes’; and that ‘neither did any other city ever suffer such miseries, nor did any age ever breed a generation more fruitful in wickedness than this was, since the beginning of the world’.”