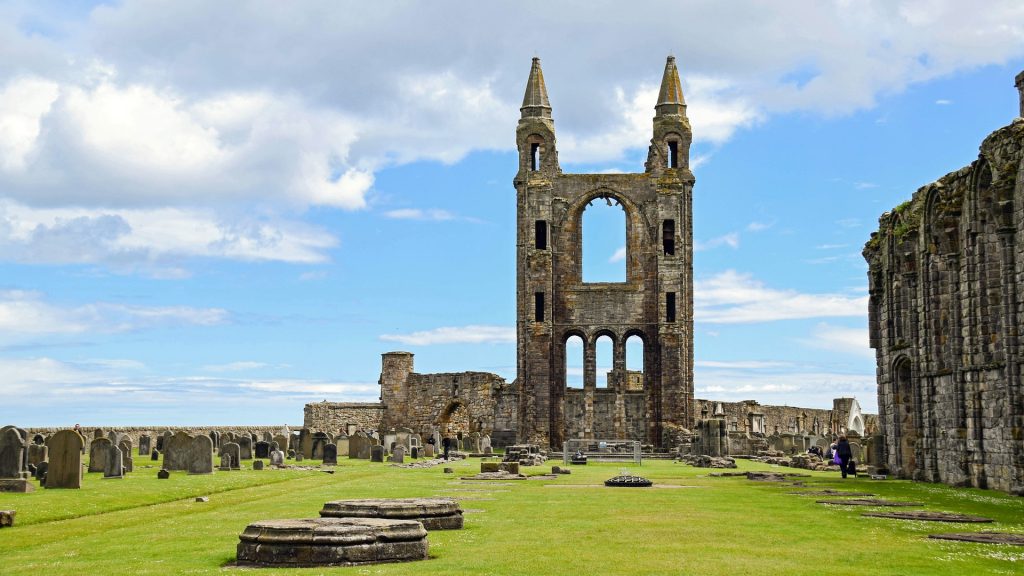 On a cold windswept afternoon on the last day of February, 1528, the first and the youngest of the Scottish martyrs of the Reformation was burned at the stake in the old university town of St Andrews.1 You can still see the spot where it happened, preserved by his initials PH marked out in the cobble stones by the gate of St Salvator’s College.2 Patrick Hamilton was only 24 years old.

St Andrews with its grand cathedral and its castle was at that time the foremost seat and centre of the Roman Catholic Church in Scotland. In that city by the sea, Archbishop James Beaton watched Hamilton fearlessly preaching the doctrines of the gospel which he had learned from Luther in Germany. Alarmed and annoyed, he soon had him accused and condemned as a heretic to suffer a heretic’s death. This became one of the main catalysts for the great spiritual changes shortly to come upon Scotland during the sixteenth century.

How did he achieve so much in such a short life? His story is full of interest.

He was probably born at his father’s estate at Stonehouse in Lanarkshire, and educated at Linlithgow. At the age of thirteen he was given the nominal title of Abbot of Fearn Abbey in Ross-shire, and was sent to the University of Paris on its income! He obtained the degree of Master of the Arts at the age of sixteen.

The writings of Martin Luther were being publicly debated at the Sorbonne while Hamilton was a student. The authorities condemned them as heretical and ordered them to be burned. In the debate, Hamilton, a young man of great intellect and honesty, came to the decision that Luther’s doctrines were correct because they were based on the Scriptures. To settle his convictions he went to Holland to study under Erasmus, the great scholar of the original Scriptures.

In 1523 he returned to Scotland and joined the Faculty of Arts at St Andrews University where he found freedom to teach and also assist in cathedral services.

At this time Luther’s books were reaching Scotland, smuggled into east coast ports such as Aberdeen, Leith, and St Andrews, sometimes hidden inside bales of cloth. The church hierarchy was now on edge because these were becoming so widely accepted throughout the country. With the authority of 14-year old King James V, the books were banned as “damnable opinions of heresy”, with severe penalties for possession. To add to their concerns, traders from Leith, Dundee, and Montrose had obtained Tyndale’s English New Testament (“recently invented by Martin Luther”, some monks declared), and were selling copies in Edinburgh and St. Andrews.

Against this background, Hamilton found many people willing to listen to him openly teaching what was based upon the Bible and not the Church. Soon, however, he was called into question by Archbishop Beaton. This led to a formal summons and an accusation of heresy with a predictable outcome. For safety, Hamilton fled to Germany in April, 1527. Arriving in Wittenberg he found to his delight that the Reformation was not just a series of doctrinal statements – monasteries were deserted, priests married, and the people joyfully singing Christian hymns.

He continued in Wittenburg and then Marburg where his faith was nurtured and his convictions deepened, expressed in a series of thirteen doctrinal theses called “Patrick’s Places”.3 In these he clearly set out the differences between law and grace, justification by faith, and the sufficiency of the work of Christ alone for salvation.

Many urged him to stay on in Marburg, but he felt the call to be a light in the darkness of his native Scotland. So he returned in the autumn of 1527. His first converts were his mother, brother, and sister, some other members of his family at Kincavel, then others in the next parish of Linlithgow. He married a young lady of noble rank and they had a daughter called Isabel. One reason for his marriage he said was to expose the hypocrisy of the celibacy of monks.

But in Beaton’s view, he was a dangerous heretic. His biographer says: “A Lutheran missionary, with royal blood in his veins, and all the power of the Hamiltons at his back, was a more formidable heretic in Scotland than Luther himself would have been”. So Patrick was invited to a conference in St Andrews. He told his friends that he believed he had not long to live. Arriving in mid January, 1528 he was given liberty to preach and teach while Beaton and his men listened and plotted. They arranged debates in which they vainly tried to convince the young man of his errors, one Alexander Alane being especially fervent in this.

When persuasion failed, force took over. His friends urged him to flee, but he refused saying this was why he had come. He preached more earnestly in the short time he had left. Early in the dark morning of 29th February Patrick Hamilton was called to a hastily arranged church council in St Andrews cathedral. His thirteen articles were read out and he was asked to deny them or confirm them. One famous reply was, “I say with Paul, ‘There is no mediator betwixt God and man but Christ Jesus, His Son’; and whatsoever they be who call or pray to any saint departed, they spoil Christ Jesus of His office.” Confidently and ably he confirmed all that he had written. He was condemned to death without delay. His brother Sir James Hamilton was actually on his way to rescue him by force, but was delayed by a storm in the Firth of Forth.

At noon the prisoner was taken and chained to the stake surrounded by faggots and gunpowder. Before a large crowd of witnesses he was given a last chance to deny his confessions and obtain his life. Calmly and with dignity he maintained his stand for the truth. So the fire was kindled. Some gunpowder exploded, but the wind and the rain put the fire out, prolonging his suffering. Three more attempts had to be made with fresh combustibles before the terrible act was concluded by 6pm that fateful evening. His last words were: “How long, Lord, shall darkness overwhelm this kingdom? How long wilt Thou suffer this tyranny of men? Lord Jesus, receive my spirit!”

The effect of his martyrdom would be far reaching. One of his first converts was the Alexander Alane (Alesius) who had debated with him only weeks before. He fled to Germany and became a key figure in support of the reformation there and in England. He carried with him these eye witness accounts of Hamilton’s martyrdom which have survived to appear here.

Another was Henry Forrest, a young monk who spoke out in favour of Patrick Hamilton and his beliefs. He was thrown into prison and sentenced to be burnt. When his execution was being discussed, John Lindsay, one of Beaton’s men, advised that Forrest be burned in some cellar; “For,” said he, “the reek of Patrick Hamilton hath infected all those on whom it blew.” So in 1533, this martyr was secretly suffocated.

Serious questions arose in the minds of many others far and near. Why should so young a man, and a man of noble lineage, suffer in this way and with such dignity? Was what he lived and died for actually true? He became the historical and spiritual link between Martin Luther on the continent (1483–1546) and John Knox in Scotland (1510–1572). The next link would be George Wishart (1513–1546), also martyred in St Andrews only 18 years later as we shall see next. These courageous torchbearers of the truth were “faithful unto death” to pass on to others and eventually to us the way of eternal life.