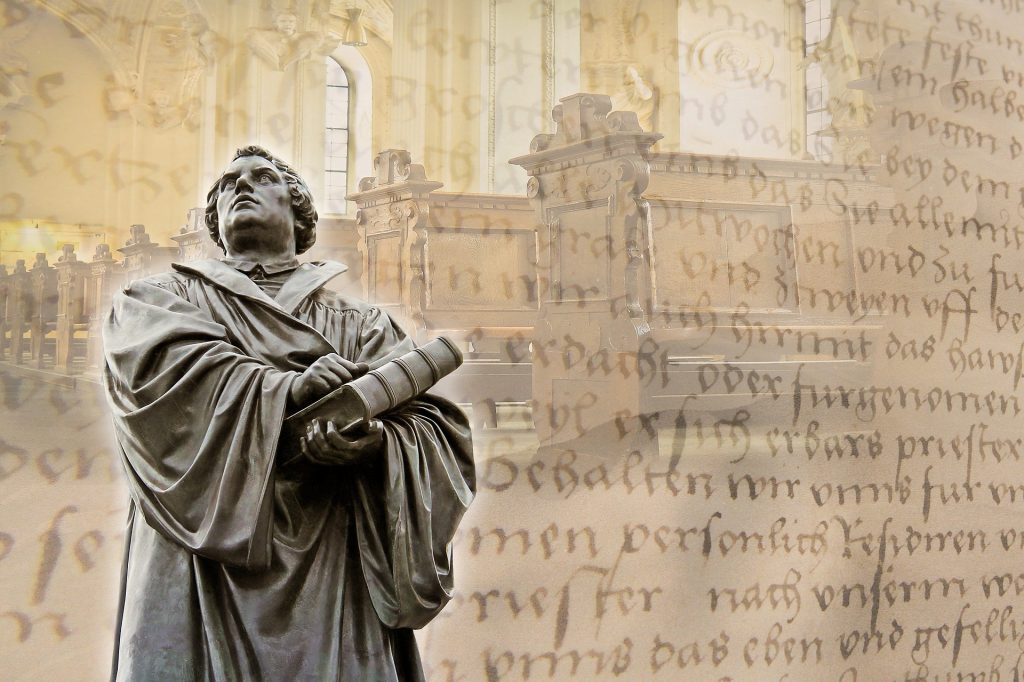 Over 500 years ago, on 31st October 1517, Martin Luther nailed his 95 Theses to the door of All Saints’ Church in Wittenberg, Germany, in an act ever after considered to be the starting point of the Reformation. The historically and globally momentous nature of this event is astounding in every respect. David Gilliland, author and Bible teacher from Lurgan, Northern Ireland, brings this moment in history to life in the following article entitled “The Monk and his Mallet: The Life and Legacy of Martin Luther”.

Earlier this year (in May 2017), a 500-year-old copy of Martin Luther’s 95 Theses was sold in Germany for 1.1 million euros, far exceeding its original estimate of €150,000. The auctioneer’s catalogue described the pamphlet as “an excessively rare document, whose historical significance can hardly be overestimated”. Was this a piece of auction rhetoric, or does it fairly represent what happened on 31st October 1517? By common consent, what happened that day was a turning point in the stream of history, and a watershed moment for the continent of Europe. Law, politics, literature and scientific investigation, for over a thousand years firmly held in the grip of the established church, would never be the same. The prime mover was a little man who, up to that time, was scarcely known. His name was Martin Luther. 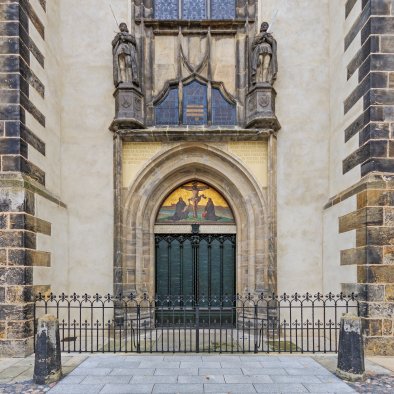 On that October day, Martin Luther attached his 95 Theses to the door of the Castle Church in Wittenberg (essentially the public noticeboard of those times). This document (really bullet points for discussion) highlighted issues which Luther thought should be challenged in a public debate. The debate never happened as planned, for within a short time these 95 points had been translated from their original Latin into German, and Europe was flooded with copies. Luther had, at this point, no thought whatever of breaking with the established church. His thinking was more along the lines of reformation within the church. However, by a very positive providence there was an escalation of protest and, in spite of Luther’s intentions, the Reformation train, so to speak, had pulled out of the station, and would travel faster and further than Luther or anyone else ever imagined.

What inspired Luther to formulate his list was a desire to stop a scandal caused by the sale of ‘Indulgences’. These were certificates of absolution which could be purchased on behalf of dead relatives, promising to shorten their stay in purgatory. The whole exercise was, in effect, a fund-raising endeavour by Pope Leo X, who desperately needed finance for his ostentatious building projects in the city of Rome. The sums paid for Indulgences differed from place to place but, in Luther’s area, sales were promoted by a rather notorious papal representative, John Tetzel. He employed high-pressure techniques, assuring the people that as soon as their florins hit the bottom of his coffers, the souls of their dead leapt from the flames of purgatory. Luther was aghast at this exploitation of poorer people, and his Theses were a protest against such excesses. His challenge appealed to the common people, and there was large-scale support for Luther’s campaign. The little monk, with his mallet and manuscript, had struck the blow, and he has left an indelible mark on subsequent history.

Luther was 33 years old when he nailed his Theses to the door. But what events earlier in his life had made the man for this moment? He was born the son of a miner in the town of Eisleben on 10th November 1483. His father intended for him a career in law, and Luther’s education had that in view. In July 1505, however, his life unexpectedly changed direction. After surviving a life-threatening thunderstorm in which he vowed to become a monk if he was spared, Luther kept his vow, much to his father’s chagrin. In midsummer of 1505, Luther donned the habit of a monk, and entered the strictest monastery in the city of Erfurt (the university city where he had earlier earned his BA and MA degrees). If ever a monk took his office seriously it was this new adherent. Obsessed with finding peace for his troubled conscience, Luther exceeded all his contemporaries in the strict observance of every conceivable religious rite. He later testified that “when I was a monk, I wearied myself greatly with fastings, vigils, prayers, and other very rigorous works. I earnestly thought to acquire righteousness by my works”. This latter statement brings us to the hub of his quest. Where could righteousness before God be found? It would be another ten years before he would discover the Biblical answer to that question, illuminating his soul like a new dawn. In 1507 Luther was ordained a Roman Catholic priest. What he perceived as the solemnity of this office brought a new wave of terrors into his soul. A mission to Rome in 1510 did nothing to ease his inner pain and, in fact, only exacerbated his grief. The formality, hypocrisy and extravagance he witnessed in the capital city deepened his disillusionment, and a despondent Luther returned to the University of Wittenberg where, in 1512, he was appointed ‘Lectura in Biblia’ (Lecturer in Bible). Now he had to teach Scripture and, over the next five years, his professional duties led him to a close study of the book of Psalms and the epistles to the Romans, Galatians and Hebrews.

It was in the latter part of this period that, in the tower of the Wittenberg monastery where he lived, the full significance of the doctrine of justification by faith brought light and liberty to his imprisoned conscience. The truth of Romans 1.17, “the just shall live by faith”, floodlit his darkened heart, and this later became the watchword of Luther’s message. Concerning that moment of conversion, Luther wrote “Here I felt that I was altogether born again and had entered Paradise through open gates”. The resting place of his soul was no longer church creeds, traditions, councils and dogmas; it was Christ, and Christ alone. No longer was “righteousness before God” a goal to be achieved; it was a gift to be received by faith. Luther, in the remaining years of his life, championed this fundamental Gospel doctrine. Through misrepresentation, excommunication, exile, trial and imprisonment, he battled against all his opponents. Those were stormy times, and Luther’s later life was rarely free from tumult. Yet, through it all, he tenaciously and courageously pressed on, for the God who raised him up, as the man for the moment, held him up. There were great social, political and economic upheavals. At times he suffered much in mental and physical health. Often there were family sorrows and personal problems, but he persevered. Besides authoring numerous books, his focus in later life was preaching the Word of God. Bible exposition became the hallmark of his ministry. At the time of his death he had just completed a two-year, verse-by-verse exposition of Genesis. As he himself famously said, “My conscience is captive to the Word of God”.

Luther died on 18th February 1546, in the town of Eisleben, a few paces from where, 62 years earlier, he had been born. Four days later he was buried in the Castle Church at Wittenberg, the very place where, 28 years previously, he posted his Theses. Reportedly his final words were “We are beggars. That is true”, alluding to our total unworthiness as fallen human beings, and our total dependence on divine grace.

Europe in Luther’s time was rapidly changing, and he was directly and indirectly involved in many of the changes which took place during his lifetime. To this day, we are indebted to the toils and testimony of the man who courageously held aloft the lamp of reformation light. That lampstand had at least five branches: sola fide (by faith alone); sola gratia (through grace alone); sola Scriptura (by Scripture alone); solo Christo (through Christ alone) and soli Deo Gloria (for the glory of God alone). As our Western society again descends into another dark age, may the flame of the great lamp of Gospel truth be rekindled in our souls and society.

However, not everything was recovered in those special times. The recovery of dispensational truth would await another day. Likewise, the separation of church and state, and the distinctiveness of gathering to the Name of the Lord Jesus alone would be later rediscovered, but we look back to the watershed of Reformation times and give God thanks for the momentous accomplishments of His grace through this one man.