James Brown, of Scotland, author or “Torchbearers of the Truth”, provides a short but useful biography of John Newton, the author of the hymn Amazing Grace. On John Newton’s gravestone it reads: “John Newton, Clerk, once an infidel and libertine, a servant of slaves in Africa, was, by the rich mercy of our Lord and Saviour Jesus Christ, preserved, restored, pardoned, and appointed to preach the faith he had long laboured to destroy.” This is his story:

The Great Awakening of the eighteenth century touched a variety of personalities, and the power of God unto salvation transformed their lives, as in all ages. In terms of outward change, the transformation in the life of John Newton was perhaps more dramatic than in any other of his time, and the story of his conversion still remains fascinating 300 years later. It is indeed a story of “Amazing Grace”, and that stirring hymn from Newton’s pen expresses the profound gratitude of the sailor, preacher, pastor and poet, who upon the wall of his study painted the text, “And thou shalt remember that thou wast a bondman in the land of Egypt, and the Lord thy God redeemed thee” (Deut 15:15). 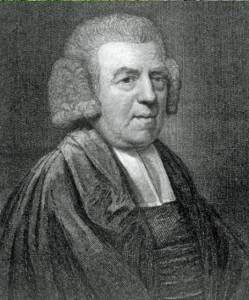 John Newton was born in Wapping, England, in 1725, the son of a shipmaster. His mother Elizabeth was a godly woman who prayed that her son would become a minister of the gospel. She died before he was seven years old, knowing nothing of the hard and tortuous path his feet would tread before her prayers were finally answered. His father wanted John to follow in his footsteps, so John went to sea, aged 11, on board his father’s ship, making five voyages in the Mediterranean trade. In 1743 he was taken by the Press Gang and put on board HMS Harwich, a new 50 gun ship. Through his father’s influence he was made midshipman, but when the ship, bound for the East Indies, called at Plymouth, Newton tried to desert. He was recaptured, suffered the customary punishment for deserters of flogging, and was demoted to ordinary seaman. A seaman’s life was tough and hard in ways that we can nowadays hardly imagine, but Newton made a hard life even harder for himself. Before being impressed into the Navy he had acquired a book, The Characteristics of Shaftesbury, the insidious influence of which led to him throwing off all restraint. At Madeira he was transferred to another ship, a slaver sailing to Sierra Leone, and among strangers he “could sin without disguise”. He later recorded, “From this time I was exceedingly vile, little indeed if anything short of that animated description of an almost irrecoverable state described in 2 Peter 2:14, “Having eyes full of adultery, and that cannot cease from sin; beguiling unstable souls”.

While on the West African coast he persuaded his captain to let him land on an island where he entered the service of a slave trader. This trader was under the influence of his native mistress who bullied Newton, treating him like a slave. His condition soon became most pitiable and wretched; however, afterwards he gained employment with another trader under less harsh conditions. Newton’s father had asked a slave ship master to look out for his son, and in 1747 John was picked up by this captain and joined his ship. It was during the passage back to Britain that the great turning point came in Newton’s life. He had been reading Thomas á Kempis just to pass the time, but the thought occurred, “What if these things be true?”. 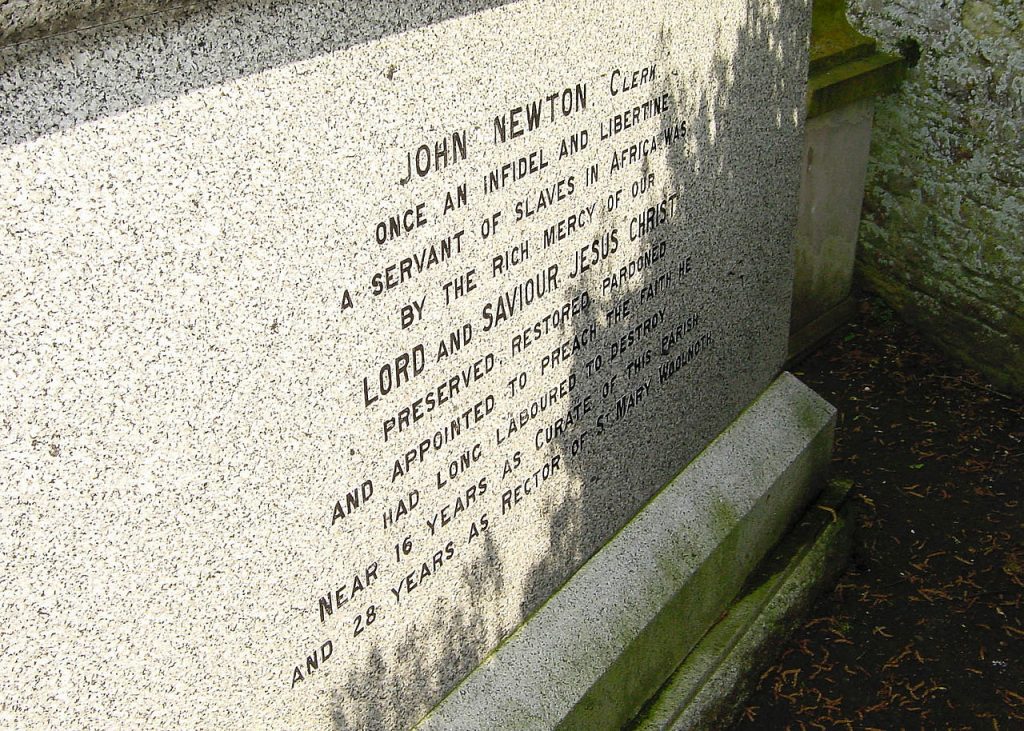 The next day the ship was labouring in a violent storm and taking in water so that Newton with others had to toil at the pumps. He said to the captain, “If this will not do, the Lord have mercy upon us”, and then he thought, “What mercy can there be for me?”. It was the first desire for mercy he had expressed for many years. He began reading the New Testament and found that the Scriptures were able to make him wise unto salvation. Newton always regarded the day of the storm, 21st March 1748, as a day to be remembered. Eventually the storm-tossed vessel made port in Lough Swilly and, after being repaired, proceeded to Liverpool. Newton stepped ashore no longer an infidel but a Christian. Sadly he did not meet his father who had sailed days before to take up a post as Governor of York Fort in Hudson’s Bay, where he died in 1750.

It may seem astonishing, but Newton continued in the slave trade, sailing as mate in 1748 and 1749, and then as master of Duke of Argyle, followed by two voyages in the African. He repressed swearing among his crew and conducted ‘Divine Service’, according to the order of the established Church, twice each Lord’s Day. The incongruity of a service being conducted on deck with perhaps two hundred slaves in chains below may be bewildering to us, but it was not so to most contemporaries. During this period, while at sea, he studied several of the Latin and Greek classics (in which he became self taught) and, with increasing devotion, the Bible.

Newton suffered an unexpected fit when in the course of preparing another ship in 1754, and though he recovered he decided to end his seagoing days. In the following year he obtained the position of surveyor of the tides at Liverpool in which he continued until his ordination. He was conscientious in carrying out his duties but became increasingly interested in the Christian ministry, forming friendships with many well known evangelists including Whitefield and Wesley, and gaining the nickname “young Whitefield”. He came to the conviction that he should seek ordination for the ministry of the Established Church and in 1758 made his first unsuccessful application. It was expected that all applicants should be learned and have a university education, but as John Wesley wrote with reference to Newton, “One of eminent learning, as well as unblameable behaviour, cannot be ordained because he was not at the university. What a mere farce is this”. Newton persevered, certain that it was the Lord’s will, and he was eventually ordained.

In 1764 his ministry commenced in Olney, a country town in Buckinghamshire, England, offering wide scope for his evangelical and pastoral gifts. His strong sense of vocation is apparent from a letter to another minister: “Remember your high calling, you are a minister and ambassador of Christ, you are entrusted with the most honourable and important employment that can engage and animate the heart of man. Filled and fired with a constraining sense of the love of Jesus and the worth of souls; impressed with an ardour to carry the war into Satan’s kingdom, to storm his strongholds and rescue his captives, you will have little leisure to think of anything else”. Newton was certainly busy in Olney as his weekly programme demonstrates:

In 1766 William Cowper came to reside in the village and their famous friendship began. It was distinguished by their collaboration in writing the Olney Hymns. Newton’s best known include “How sweet the name of Jesus sounds” and “Glorious things of Thee are spoken”. Newton and Cowper enjoyed sweet fellowship for sixteen fruitful years in Olney.

In December, 1779 Newton moved to St Mary, Woolnoth, in the heart of the city of London where he spent the remainder of his life. His preaching attracted the poor but his personality and experience fitted him to be a spiritual counsellor to folk of every strata of society. During the years 1784-1787 he came to know William Wilberforce and encouraged the younger man to commence his campaign against the slave trade. Newton published a treatise, “Reflections on the Slave Trade”, a factual and convincing record, influential in gathering support for abolition. He wrote, “The ship left the coast with 218 slaves on board. I find by my journal of that voyage (now before me) that we buried 62 on our passage to South Carolina exclusive of those who died before we left the coast”. He estimated that the English ships purchased some 60,000 slaves annually along the extent of the coast and that the annual loss of lives could not have been less than 15,000.

Mrs Newton died in 1790 and in his latter years Newton was cared for by his niece Eliza. His sight and strength gradually failed but he preached until the last year of his life. He died on 21st December, 1807. It was St. Thomas’s Day and one has noted, “A fitting day for the aged servant of Christ to pass to his rest”. Throughout his ministry he had insisted upon the sin of unbelief and the absolute necessity of belief. The author of “Begone, unbelief!” may be numbered in a special way among those “that have not seen, and yet have believed”.