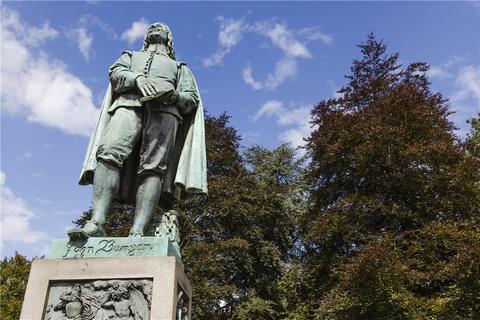 Bert Cargill of Scotland, co-author or Torchbearers of the Truth, writes a biographical sketch of the “tinker of Bedford” and author of Pilgrim’s Progress, John Bunyan (1628-1688).

John Bunyan’s torch has shone brightly far and wide. Apart from the Bible itself, no book has been so influential in bringing the gospel to so many people in so many countries as his Pilgrim’s Progress. It was once the most widely read and translated book in the English language. Since its publication in 1678 it has never been out of print. It has been translated into over 200 languages. It was the first book foreign missionaries used alongside the Bible. Once read, who can forget the lines,

Blest cross! Blest sepulchre! Blessed rather be
The Man who there was put to shame for me?

Its full original title is The Pilgrim’s Progress From This World to That Which Is to Come Delivered Under the Similitude of a Dream. It is an extended allegory set in 17th century England with locations w hich match some parts of Bedfordshire, but the story is so graphic and realistic, the language so evocative and resonating that it has long outlived its times. Some more modern renderings have been made through the centuries and it has been simplified into children’s versions, but none is as good as the original.

It was once a standard textbook in British schools, and in great English literature it has been ranked by experts alongside John Milton’s Paradise Lost and Geoffrey Chaucer’s Canterbury Tales. By 1692, four years after the author’s death, publisher Charles Doe estimated that 100,000 copies had been printed in England. By 1938, 250 years after Bunyan’s death, more than 1,300 editions of the book had been published.

What makes this all the more remarkable is that the author had very little formal education, was a tinker to trade, and wrote the book while he was in jail. And this author also produced over forty other books and pamphlets, notably Grace Abounding which is the story of the long road to his own conversion, and The Holy War, another allegory which tells of the recovery of the Town of Mansoul from Diabolus by Prince Emmanuel. His quaint but stirring hymn “Who would true valour see” comes from the later pages of Pilgrim’s Progress.

John Bunyan was born in November, 1628 at Elstow, about a mile from Bedford, England. His father, Thomas Bunyan was a tinker, making and mending pots and kettles; his mother was Margaret Bentley. Their family life was a struggle with poverty, but young John later wrote, “It pleased God to put it into their hearts to put me to school, to learn me both to read and write”. He also tells us that in his early years he was “filled with all unrighteousness”, and that he indulged in much “cursing, swearing, lying, and blaspheming the holy name of God”. At the same time, he was “greatly afflicted and troubled with the thoughts of the fearful torments of hell-fire”.

When he was sixteen, his mother died, and also his sister Margaret. His father married again soon afterwards, and a step-brother, Charles was born. John left home to spend the next three years as a soldier in the parliamentary army during the English civil war. An incident from that time made him think seriously about eternity: one night a fellow soldier who had taken his place on sentry duty was killed by a musket bullet.

After leaving the army he took up his tinker’s trade and in 1650 he got married to a pious woman called Mary. Of his wife he writes, “This woman and I, though we came together as poor as poor might be (not having so much household stuff as a dish or a spoon betwixt us both), yet this she had for her part, The Plain Man’s Pathway to Heaven and The Practice of Piety“. With these books and the help of his wife he recovered his almost lost ability to read. He also entered a period of deep spiritual struggle which he records in his Grace Abounding to the Chief of Sinners (1666), and which formed the background to the earlier part of Pilgrim’s Progress.

John and Mary Bunyan had three daughters and two sons. Their first daughter Mary was blind and John always had a deep care for her until she died in 1680. In 1658, after the birth of Thomas, his wife died. A year later he married Elizabeth – they had a daughter, and then a son in 1672. During these years John Bunyan became a changed man, a persecuted follower of Christ, and a prolific writer who would leave behind him such a lasting spiritual legacy.

John Bunyan’s spiritual struggles centred around conviction of sin and fear of divine displeasure and punishment. He feared that he had committed the unpardonable sin. A sermon denouncing labour and sports on the Lord’s Day specially moved him. Some time later while passing through the streets of Bedford, he tells us that he heard “three or four poor women” sitting at a door “talking about the new birth, the work of God in their hearts, and the way by which they were convinced of their miserable state by nature. They told how God had visited their souls with His love in Christ Jesus”. He began to seek the Lord and read the Scriptures more earnestly. Sometimes he would find encouragement to trust Christ, frequently he would relapse into despair, seeking and not finding what he looked for. Later he recounts, “As I was passing into the field…fearing yet that all was not right, suddenly this sentence fell upon my soul, ‘Thy righteousness is in heaven’…for my righteousness was Jesus Christ Himself, the same yesterday, today, and forever. Now did my chains fall off…my temptations also fled away. Now I went home rejoicing for the grace and love of God”. John Bunyan found a spiritual home in an independent congregation in Bedford led by John Gifford who baptized him (by immersion) in 1655. He continued to work as a tinker, but he soon became recognised by his friends as a gifted preacher. He preached with great fervour and power in towns and villages around Bedford. But with no “legal licence” to preach he was indicted in 1658. However, no record of any sentence exists and he just continued preaching.

In 1660 Charles II was restored to the throne of England and a clampdown on Nonconformists followed. A Bedford justice learned that Bunyan was to preach near the village of Lower Samsall and issued a warrant for his arrest. In the middle of the sermon a constable entered and arrested him and put him into Bedford Jail to await the next Quarter Sessions. He was charged with “being a common upholder of several unlawful meetings and conventicles to the great disturbance and distraction of the good subjects of this kingdom”. The sentence was three more months in jail, and if then he “should not submit to go to church and leave off preaching” he should be “banished the realm”. If found in the country after that, he should hang. This sentence was not carried through, but Bunyan was left in Bedford Jail for twelve years, during which time many of his books were written. He supported his family by making “long tagged laces”, and he had periods of relative freedom when his jailers allowed him out to preach. Inside he also preached regularly to around fifty prisoners at a time. In 1672 the King suspended all the statutes against Nonconformists and Bunyan received royal authority to preach in the Bedford church where his congregation soon numbered 4,000. He also established over thirty new congregations nearby. His reputation extended as far as London, where great crowds gathered to hear him and where he became chaplain to the Lord Mayor.

This period of freedom was short lived, however, for in 1675 many licences to preach were withdrawn and soon a warrant was issued for the arrest of Bunyan on the charge of “having preached to or teached at a Conventicle meeting or assembly under colour or pretence of exercise of religion in other manner than according to the Liturgie or Practice of the Church of England”. He was imprisoned this time for six months, probably in the one-room jail on the bridge over the River Ouse and it is here that most of Pilgrim’s Progress was written. Once published it was so popular that Bunyan’s later years became very influential, with his services called upon all over England, though not entirely free from the danger of ecclesiastical interference.

His life ended suddenly at the age of sixty. His extensive writing and publishing work were taking their toll on his health. In the summer of 1688 he was asked to go to Reading to resolve a dispute between a father and his son. On the way back to London he was soaked in a rainstorm and developed pneumonia. He died ten days later at the house of his friend, John Strudwick, in Holborn Bridge on 31st August. He was buried at Bunhill Fields cemetery.

So another pilgrim reached the Celestial City – “he passed over, and all the trumpets sounded for him on the other side”.