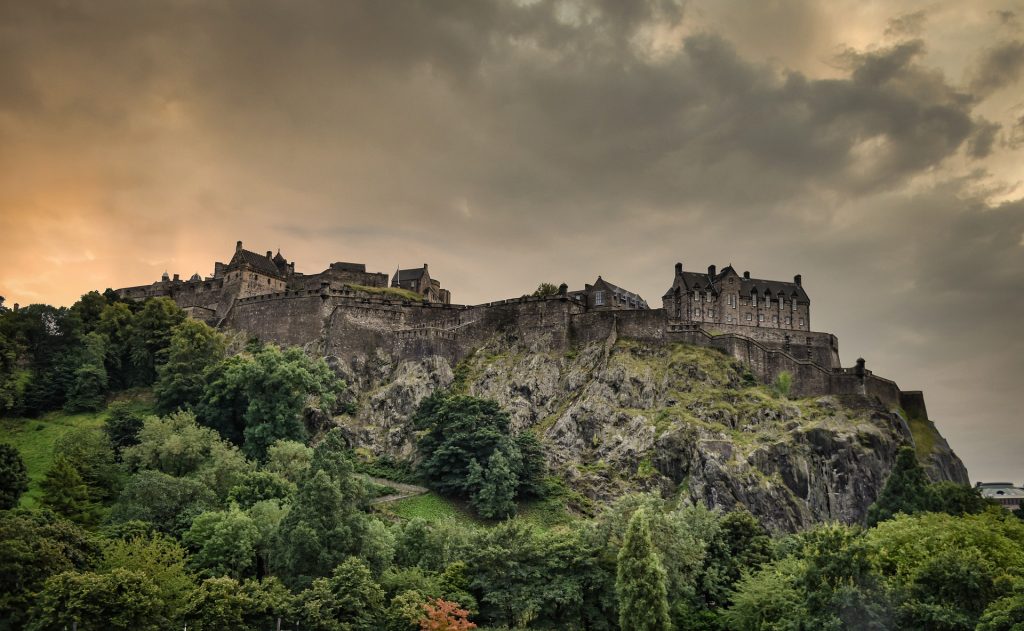 Bert Cargill of Scotland, co-author or “Torchbearers of the Truth”, writes the following brief biography of the early Scottish Reformer and martyr George Wishart (1513-1546).

George Wishart arrived on the scene of pre-reformation Scotland at a critical time. A biography of Wishart begins thus: “The martyrdom at St Andrews…of Patrick Hamilton…sufficiently proved that, in the maintenance of its supremacy, the Roman Church was determined to strike everywhere. But the death of this amiable martyr, instead of repressing…induced further investigation into the working of a system, maintained by the sale of indulgences on the one hand, and upheld by the executioner on the other.”1 George Wishart was to advance this further investigation and also seal it by his own martyrdom in St Andrews.

He was born at Pitarrow, near Montrose on the east of Scotland, the only son of James Wishart, a justice-clerk to King James V. He studied at the University of Leuven and graduated in 1531, well qualified in the Greek language. He returned to teach Greek at Montrose in a school established by John Erskine of Dun, using as his textbook copies of the Greek New Testament which he distributed among his pupils. This was reported to John Hepburn, Bishop of Brechin, who summonsed him in 1538 on investigation of heresy. It was a crime to read the New Testament in its original language!

He fled to Cambridge where he was able to study and teach, then to Bristol where his preaching aroused opposition from Archbishop Thomas Cranmer. He then recanted some of his statements, escaping death by “burning his faggot”. He returned to Germany and visited Switzerland, where his commitment to Luther’s teaching was reinforced, before returning to Cambridge in 1542. At that university he was noted for his humble, godly, and charitable lifestyle.

He returned again to Scotland in July, 1543, assured of the protection of some noblemen who were in alliance with the king of England and had actually plans laid to assassinate Cardinal David Beaton. (He had been appointed Cardinal in 1539 following the death of his uncle, the James Beaton of St Andrews who had martyred Patrick Hamilton.) Wishart spent some time in secret at his native Pitarrow, but could not rest from his urge to evangelise Scotland. So he went and preached to large audiences in Montrose and Dundee, then in the west of Scotland, including Ayr, Galston, Bar, and Mauchline.

While in the west he heard that the plague was raging in Dundee. He hurried back, and, surrounded by disease and misery, he preached from the text, “He sent his word, and healed them” (Psa 107.20); adding, “It is neither herb nor plaster, O Lord, but Thy word healeth all.” Holding forth at the East Port of the stricken city (later called the Wishart Arch, still standing) he was heard by the victims banished outside and the still healthy inside. Staying on, he visited the sick and preached God’s Word.

All of this did not escape the attention of Beaton only 11 miles away in St Andrews. He arranged for a Dundee priest to assassinate Wishart with a dagger as he came down from the pulpit. But Wishart saw him first and disarmed him. The crowd called for the death of the assassin, now asking for mercy, but Wishart restrained them and let the man go free. Later he evaded an ambush to capture him on a journey to one of his friends. It was now clear that his life was in danger, so from then on he never moved about without a bodyguard and a strong man carrying a two-handed sword. As we have seen, John Knox was the last to do this.

While at Dundee, he was invited to Edinburgh by some of his supporters who intended to have a public debate there with the bishops. This did not materialise, but he found opportunities to preach to many in Leith, Inveresk, Tranent, and Haddington at the end of 1545. On one occasion when only a few turned up to hear him he cried, “O Lord, how long shall it be that Thy holy word shall be despised, and men shall not regard their own salvation?” For a few months he lived in Brunstain, Longniddry, and Ormiston, with gentlemen who supported the reformation cause.

On leaving Haddington to go to Ormiston with his host John Cockburn for the last time, he took leave of his friends, including John Knox who wished to accompany him, saying, “Nay, return to your bairns and God bless you. One is sufficient for a sacrifice”.

The Provincial Synod had met at Edinburgh on 13th January, but Beaton adjourned it till after Easter, promising that in the interval he would “put to silence a heretic who was giving him much concern by disturbing the Church”. Shortly thereafter, along with the Earl of Bothwell as local Sheriff, Beaton had the house of Ormiston surrounded by troops at midnight and ordered Cockburn and his guests to surrender. Bothwell promised Wishart that he would be kept safe in his custody. Wishart said, “Open the gates, the blessed will of my God be done”. 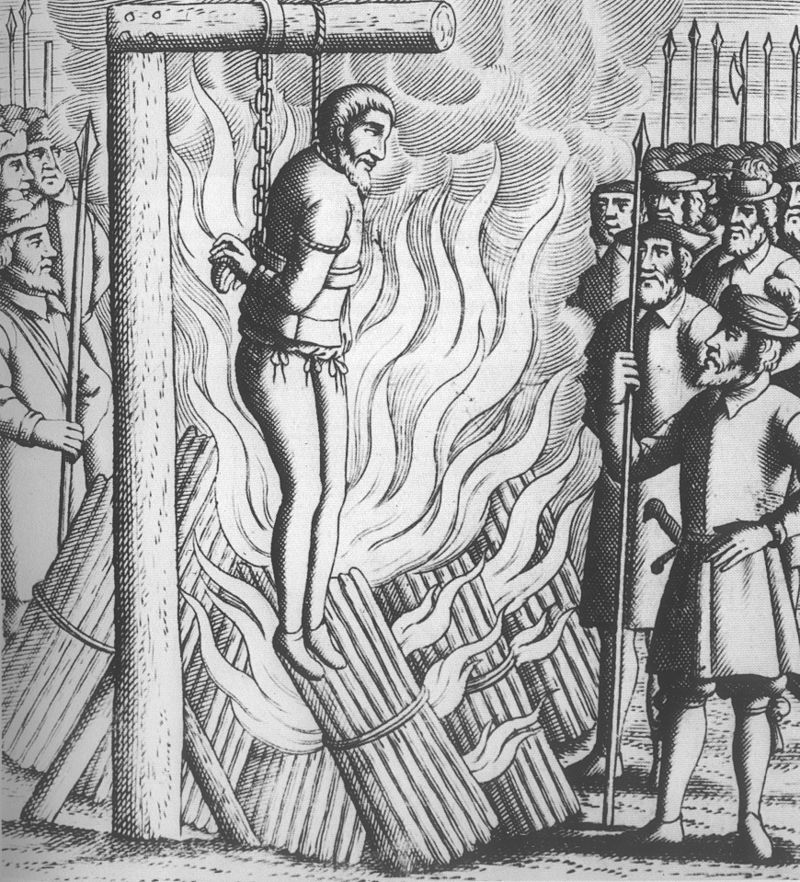 Bothwell took Wishart to Elphinstone Tower on 16th January while John Cockburn and other sympathisers were sent to Edinburgh Castle. Cockburn later escaped by climbing down the castle wall. Bothwell soon abandoned his promises and delivered Wishart to the governor of Edinburgh Castle. After a few days, he was removed by the Cardinal to his castle in St Andrews, and there confined for four weeks in the notorious “bottle dungeon” in the sea-tower.

On 28th February, Beaton along with Archbishop Dunbar of Glasgow and all the bishops met in his cathedral. Armed men fetched the prisoner. At the gate of the cathedral he threw his purse to a beggar, saying that he would no longer need it. After an address by Winram, a church dignitary, George Wishart was given the opportunity to reply and defend himself. He did so with dignity but was railed on and defamed at every turn.

As expected, the bishops returned a verdict of “guilty”. Wishart, on his knees, prayed, “Gracious and everlasting God, how long wilt Thou permit Thy servants to suffer through infatuation and ignorance? We know that the righteous must suffer persecution in this life, which passeth as doth a shadow, yet we would entreat Thee, merciful Father, that Thou wouldest defend Thy people whom Thou hast chosen, and give them grace to endure and continue in Thy Holy Word”.

The cardinal sentenced the prisoner to be burned to ashes. The execution was fixed for the next day, 1st March. A stake was erected in the centre of an open space in front of the castle. At the front windows the cardinal and bishops reclined on sumptuous cushions while two executioners brought out the prisoner. They dressed him in black linen, hung bags of gunpowder around him, then led him to his death.

At the stake, Wishart fell upon his knees, and loudly prayed: “Saviour of the world, have mercy upon me. Heavenly Father, into Thy hands I commend my spirit”. To the crowd he said: “Christian brethren and sisters, be not offended at the Word of God on account of the tortures you see prepared for me. Love the Word which publisheth salvation, and suffer patiently for the Gospel’s sake. To my brethren and sisters who have heard me elsewhere, declare that my doctrine is no old wife’s fables, but the blessed Gospel of salvation. For preaching that Gospel, I am now to suffer, and I suffer gladly for the Redeemer’s sake. Should any of you be called on to endure persecution, fear not them who can destroy the body, for they cannot slay the soul. I believe that my soul shall sup with my Saviour this night”.

He prayed for those who had accused and condemned him. One of the executioners asked his forgiveness. He kissed him on the cheek, saying, “By this token I forgive thee; do thine office”. Now tied to the stake, a heap of faggots was piled around his body, the fire was lit and amid the explosions and the flames he left this world and entered the joy of his Lord.

On 29th May a band of Fife men led by Norman and John Leslie cunningly gained access to Beaton’s castle and murdered him. They stripped him, and his disfigured body hung for weeks from the very window where he had watched the dying agonies of George Wishart. Soon afterwards in that very castle, the first congregation of the Protestant Church in Scotland was meeting, with John Knox among the congregation.