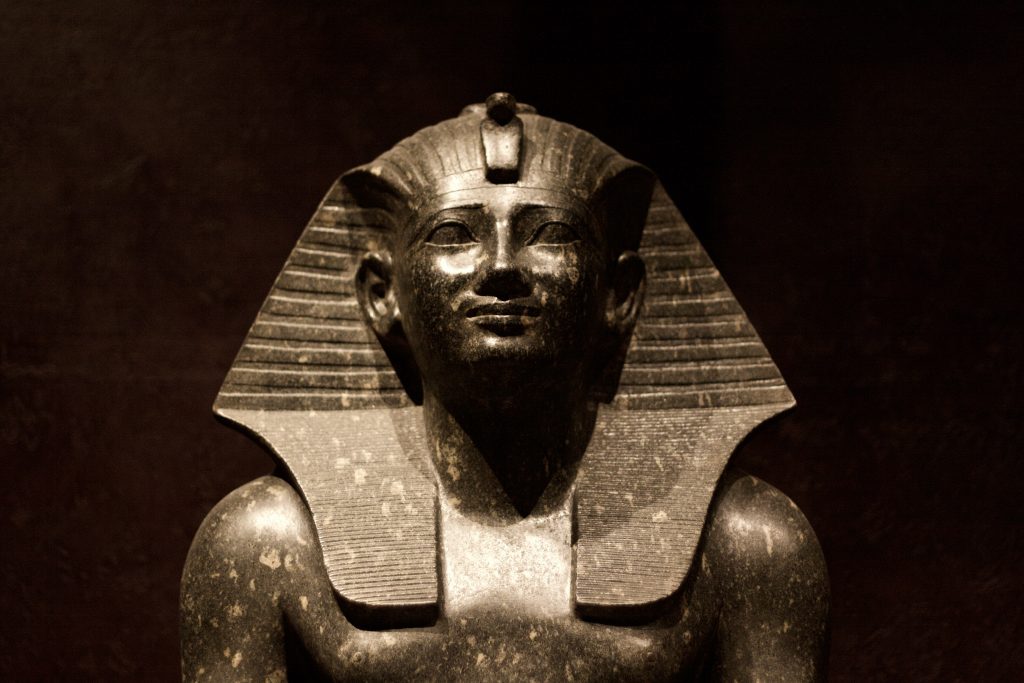 Romans 9:17-18 says, “For the scripture saith unto Pharaoh, Even for this same purpose have I raised thee up, that I might shew my power in thee, and that my name might be declared throughout all the earth. Therefore hath he mercy on whom he will have mercy, and whom he will he hardeneth.”

These verses have generated considerable debate over the centuries. Exactly what does the hardening of Pharoah’s heart signify? Was it God who hardened his heart or was it Pharoah himself? If it was both, who hardened it first, and why? Alfred Edersheim, a Biblical scholar known especially for his book The Life and Times of Jesus the Messiah, writes insightfully on this issue in his Bible History, OT, Vol 1. The following paragraphs are taken from the Wm. B. Eerdmans printing of 1956, pages 59-61:

“Before we pass to an account of the wonders by which Moses was so soon to prove before Pharaoh the reality of his mission, it may be convenient here briefly to consider a very solemn element in the history of these transactions – we mean, the hardening of Pharaoh’s heart. Not that we can ever hope fully to understand what touches the counsels of God, the administration of His government, the mysterious connection between the creature and the Creator, and the solemn judgments by which He vindicates His power over the rebellious. But a reverent consideration of some points, taken directly from the text itself, may help us at least, like Israel of old, to ‘bow our heads and worship’. We have already noticed, that before Moses had returned into Egypt (Exod 4:21) God had declared of Pharaoh, ‘I will harden his heart’, placing this phase in the foreground, that Moses might be assured of God’s overruling will in the matter. For a similar purpose, only much more fully expressed, God now again announced to Moses, before the commencement of the ten plagues (Exod 7:3); ‘I will harden Pharaoh’s heart, and multiply My signs and My wonders in the land of Egypt.’

“These are the two first statements about the hardening of Pharaoh’s heart. In both cases the agency is ascribed to God; but in both cases the event is yet future, and the announcement is only made in order to explain to Moses what his faith almost needed to know.

“Twice ten times in the course of this history does the expression hardening occur in connection with Pharaoh. Although in our English version only the word ‘harden’ is used, in the Hebrew original three different terms are employed, of which one (as in Exod 7:3) literally means to make hard or insensible, the other (as in 10:1) to make heavy, that is, unimpressionable, and the third (as in 14:4), to make firm or stiff, so as to be immovable. Now it is remarkable, that of the twenty passages which speak of Pharaoh’s hardening, exactly ten ascribe it to Pharaoh himself, and ten to God,1 and that in both cases precisely the same three terms are used. Thus the making ‘hard’, ‘heavy’, and ‘firm’ of the heart is exactly as often and in precisely the same terms traced to the agency of Pharaoh himself as to that of God. As a German writer aptly remarks, ‘The effect of the one is the hardening of man to his own destruction; that of the other, the hardening of man to the glory of God.’

“Proceeding further, we find that, with the exception of the two passages (Exod 4:21; 7:3) in which the Divine agency in hardening is beforehand announced to Moses for his instruction, the hardening process is during the course of the actual history, in the first place, traced only to Pharaoh himself. Thus, before the ten plagues, and when Aaron first proved his Divine mission by converting the rod into a serpent, (Exod 7:10) ‘the heart of Pharaoh was hardened’, that is, by himself (v13-14).2

“Similarly, after each of the first five plagues (7:22; 8:15; 8:19; 8:32; 9:7) the hardening is also expressly attributed to Pharaoh himself. Only when still resisting after the sixth plague do we read for the first time, that ‘the Lord made firm the heart of Pharaoh’ (9:12). But even so, space for repentance must have been left, for after the seventh plague we read again (9:34) that ‘Pharaoh made heavy his heart’; and it is only after the eighth plague that the agency is exclusively ascribed to God. Moreover, we have to consider the progress of this hardening on the part of Pharaoh, by which at last his sin became ripe for judgment. It was not only that he resisted the demand of Moses, even in view of the miraculous signs by which his mission was attested; but that, step by step, the hand of God became more clearly manifest, till at last he was, by his own confession, ‘inexcusable’. If the first sign of converting the rod into a serpent could in a certain manner be counterfeited by the Egyptian magicians, yet Aaron’s rod swallowed up theirs (7:12). But after the third plague, the magicians themselves confessed their inability to carry on the contest, declaring, ‘This is the finger of God’ (8:9). If any doubt had still been left upon his mind, it must have been removed by the evidence presented after the fifth plague (9:7), when ‘Pharaoh sent, and, behold, there was not one of the cattle of the Israelites dead’. Some of the Egyptians. at least, had profited by this lesson, and on the announcement of the seventh plague housed their cattle from the predicted hail and fire (9:20-21). Lastly, after that seventh plague, Pharaoh himself acknowledged his sin and wrong (9:27), and promised to let Israel go (v28). Yet after all, on its removal, he once more hardened his heart (v35)!

“Can we wonder that such high-handed and inexcusable rebellion should have been ripe for the judgment which appeared in the Divine hardening of his heart? Assuredly in such a contest between the pride and daring of the creature and the might of the Lord God, the truth of this Divine declaration had to be publicly manifested: ‘Even for this purpose have I raised thee up, that I might show My power in thee, and that My name might be declared throughout all the earth’ (Rom 9:17).

“For the long-suffering and patience of God will not always wait. It is indeed most true, that ‘God hath no pleasure in the death of the wicked, but rather that he be converted and live’ (Ezel 33:11); and that He ‘will have all men come to the knowledge of the truth and be saved’ (1 Tim 2:4, 2 Pet 3:9). But ‘he that being often reproved hardeneth his neck, shall suddenly be destroyed, and than without remedy’ (Prov 29:1).

The same manifestation of God which to the believing is ‘a savour of life unto life’, is to those who resist it ‘a savour of death unto death’. As one has written, ‘the sunlight shining upon our earth produces opposite results according to the nature of the soil’. In Scripture language: (Heb 6:7, 8) ‘the earth which drinketh in the rain that cometh oft upon it, and bringeth forth herbs meet for them by whom it is dressed, receiveth blessing from God: but that which beareth thorns and briars is rejected, and is nigh unto cursing; whose end is to be burned’. Or, as a German writer puts it, ‘It is the curse of sin that it makes the hard heart ever harder against the gracious drawing of the Divine love, patience, and long-suffering’. Thus they who harden themselves fall at last under the Divine judgment of hardening, with all the terrible consequences which it involves.

“Hitherto we have only traced this as it appears in the course of Pharaoh’s history. There are, however, deeper bearings of the question, connected with the Divine dealings, the sovereignty, and the power of God. For such inquiries this is obviously not the place. Suffice it to draw some practical lessons. First and foremost, we learn the insufficiency of even the most astounding miracles to subdue the rebellious will, to change the heart, or to subject a man unto God. Our blessed Lord Himself has said of a somewhat analogous case, that men would not believe even though one rose from the dead (Lu 16:31). And His statement has been only too amply verified in the history of the world since His own resurrection. Religion is matter of the heart, and no intellectual conviction, without the agency of the Holy Spirit, affects the inmost springs of our lives. Secondly, a more terrible exhibition of the daring of human pride, the confidence of worldly power, and the deceitfulness of sin than that presented by the history of this Pharaoh can scarcely be conceived. And yet the lesson seems to have been overlooked by too many! Not only sacred history but possibly our own experience may furnish instances of similar tendencies; and in the depths of his own soul each believer must have felt his danger in this respect, for ‘the heart is deceitful above all things, and desperately wicked’. Lastly, resistance to God must assuredly end in fearful judgment. Each conviction suppressed, each admonition stifled, each loving offer rejected, tends towards increasing spiritual insensibility, and that in which it ends. It is wisdom and safety to watch for the blessed influences of God’s Spirit, and to throw open our hearts to the sunlight of His grace.”