Did Christ Die for All? 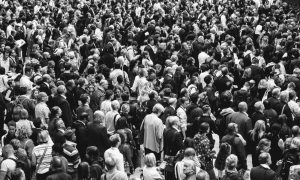 Did Christ Die for All?

David McAllister, a Bible teacher from Donegal, Ireland, takes up the topic of the vicarious death of Christ and asks “For whom did Christ die? Was it for all or just for a select few?”

According to one dictionary, the word “vicarious” means “acting or done for another”. It is in this sense that we use the word to describe the death of the Lord Jesus. He did not undergo death for Himself, but for others.

This raises an obvious question. Who are those ‘others’ for whom He died? Certainly, He died for believers. We do not need to go outside Paul’s writings to find ample testimony to this. As an individual, he writes of “the Son of God, Who loved me, and gave Himself for me” (Gal 2:20). Writing to believers collectively, he says that He “gave Himself for us” (Titus 2:14), and “gave Himself for our sins” (Gal 1:4). Of “the Church, which is His body”, composed of every true believer in the present age, he writes, “Christ also loved the Church, and gave Himself for it” (Eph 5:25). Yes, undoubtedly He died for us, Christians, and it is a most precious truth.

He died for us, but His death was not for us alone. Many Scriptures show, to those prepared to accept that the Bible says what it means and means what it says, that He died for everyone. We cannot give all the references in an article of this length, so we will quote only a few.

In 1 Timothy 2, Paul writes that God “will have all men to be saved” (v4) and that “Christ Jesus…gave Himself a ransom for all” (v5-6). That the ‘all’ is not limited to believers is clear from the context – the phrase “all men” in verse 4 is repeated from verse 1, where it includes kings and others in authority, who generally are not saved people. Thus, Paul is showing that God desires the salvation of all, and that He has acted upon this desire by providing His Son to die for all.

John writes of Jesus Christ that “He is the propitiation for our sins: and not for ours only, but also for the sins of the whole world” (1 John 2:2). There could hardly be a clearer statement of the fact that Christ’s propitiatory work was for all. Some who disagree point out (rightly) that, in the phrase “the sins of the whole world”, the words “the sins of” are not in the original, but are supplied by the translators. However, propitiation in the Scriptures is always dealing with sins, and we can reasonably ask them this question: “If He is not the propitiation for their sins, then in what sense is He the propitiation for them?” There is no satisfactory answer to this question. Others use a different tack, saying that “the world” means not everyone in the world, but ‘the world of believers’, and that “ours” refers to the sins of a certain group of believers (some say it is the apostles, others that it is those from a Jewish background). However, all believers are in view in verse 1, and it is totally artificial to argue that John is switching to speak only of apostles or of Jewish Christians at the beginning of verse 2, and then reverting to speaking of all Christians at the end of that verse. The straightforward way to understand verse 2 is that “our” refers to all believers, and “the whole world” refers to everyone in the world, whether they are believers or not.

There are many references to the love of God for ‘the world’ (e.g. “For God so loved the world, that He gave His only begotten Son”, John 3:16); to Christ as the Saviour of ‘the world’ (e.g. “The Father sent the Son to be the Saviour of the world”, 1 John 4:14); and to His death being for ‘the world’ (e.g. “Behold the Lamb of God, which taketh away the sin of the world”, John 1:29). Those who deny that Christ’s death was for all, counter with the assertion that, when ‘the world’ is used in Scripture, it does not always mean ‘all the people in the world’. That is true, and we heartily agree that any term must always be interpreted according to its context. However, in the above quoted examples, and in many others, there is nothing in the context to suggest any limitation. The conclusion, unless one is seeking to deny it, is that God’s love extends to all, He has provided a Saviour for all, and Christ’s death is for all.

In Hebrews 2:9, we read that He came to “taste death for every man”. In many translations the word translated “every man”, is here rendered “everyone”. Darby’s translation has “everything”. Even if this is the true sense, it does nothing to limit the provision. On the contrary, it shows that His death was not only for all people, but for the whole of the creation; a fact corroborated by other Scriptures.

Finally a couple of quotes from 2 Peter. Writing of people who most certainly are not believers, Peter says that they will deny “the Lord that bought them” (2:1). This shows that the price paid by the Lord Jesus extends to those who will not be saved, as well as those who will. Then we read: “The Lord is…not willing that any should perish, but that all should come to repentance” (3:9). That could only be true if the provision He has made is for all, which indeed it is.

If, then, Christ died for all, does that mean that everyone will be saved? And if not, why not? Article to follow next week addressing these questions.

Questions or comments to: info@webtruth.org