Did Christ Keep the Law for His People? (William R. Newell) 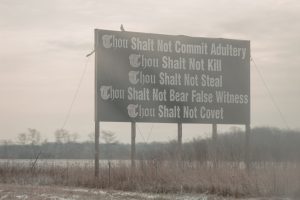 William R. Newell (1865-1956) is known for his commentaries on Romans, Hebrews and Revelation, as well as his famous hymn “Years I Spent in Vanity and Pride”. He studied at Wooster (Ohio) College, as well as Princeton and Oberlin Seminaries. From 1896-1898 he was the assistant superintendent of Moody Bible Institute in Chicago under R.A. Torrey.

The following paragraphs are from his commentary on Romans 10:4 “Christ is the end of the law for righteousness to every one that believeth”. In them he deals with the mistaken idea in Reformed Theology that “Christ perfectly obeyed the Mosaic law in the place of His people” and that this “active obedience” by Christ in His life on earth – combined with His “passive obedience” in death – constitutes the righteousness that is imputed to the sinner when he is justified by faith. Rather, contends Newell, the work of Christ on the cross alone provides the basis for sinners being justified and being given a righteousness – a righteous standing – from God as a gift (Rom 3:22, 4:5, 5:17).

“Christ is the end of the law unto righteousness to every one that believeth”. There has been much discussion of the meaning of the word ‘end’ here. Let us see if Scripture does not clear up this matter for us. When Christ died, He bore for Israel the curse of the Law, for they, and they alone, were under the Law. Divine law, being broken, does not ask for future good conduct on the part of the infractor; but for his death – and that only. Now Christ having died, all the claims of the Law against that nation which had been placed under law were completely met and ended. So that even Jews could now believe, and say, “I am dead to the Law”!

To him that believeth, therefore, Jew or Gentile, Christ, dead, buried, and risen, is the end of law for righteousness – in the sense of law’s disappearance from the scene! Law does not know, or take cognisance of believers! We read in Chapter 7:6 that those who had been under the Law were discharged from the law, brought to nought, put out of business (katargeo), with respect to the Law! The Law has nothing to do with them, as regards righteousness.

The Scripture must be obeyed with the obedience of belief: “Ye are not under law [not under that principle] but under grace”(the contrary principle). “Ye are brought to nothing from Christ [literally, “put out of business from Christ”], ye who would be justified by the Law; ye are fallen away from grace” (Gal 5:4). Paul writes in Hebrews 7:18-19, “There is a disannulling of a foregoing commandment, because of its weakness and unprofitableness (for the Law made nothing perfect), and a bringing in thereupon of a better hope, through which we draw nigh unto God”. Again, “Christ abolished in His flesh the enmity [between Jew and Gentile], even the Law of commandments contained in ordinances” (Eph 2:15); again, speaking as a Hebrew believer, Paul says, “Christ blotted out the bond written in ordinances that was against us, which was contrary to us: and He hath taken it out of the way, nailing it to the cross” (Col 2:14).

If these scriptures do not set forth a complete closing up of any believer’s account toward the Law, or to the whole legal principle, I know nothing of the meaning of words.

The words Christ is the end of the Law, cannot mean Christ is the “fulfilment of what the law required“. The Law required obedience to precepts – or death for disobedience. Now Christ died! If it be answered that before He died He fulfilled the claims of the Law, kept it perfectly, and that this law-keeping of Christ was reckoned as over against the Israelite’s breaking of the Law, then I ask, why should Christ die? If the claims of the law were met in Christ’s earthly obedience, and if that earthly life of obedience is “reckoned to those who believe”, the curse of the Law has been removed by “vicarious law keeping”. Why should Christ die?

Now this idea of Christ’s keeping the Law for “us” (for they will include us among the Israelites! although the Law was not given to us Gentiles), is a deadly heresy, no matter who teaches it. Paul tells us plainly how the curse of the Law was removed: “Christ redeemed us”, (meaning Jewish believers) “from the curse of the Law, having become a curse for us (Gal 3:13)! And how He became a curse is seen in Deut 21:23: “He that is hanged is accursed of God”. It was on the cross, not by an “earthly life of obedience”, that Christ bore the Law’s curse.

There was no law given “which could make alive” Paul says; “otherwise righteousness would have been by it”. Therefore those who speak of Christ as taking the place of fulfilling the Law for us – as “the object at which the Law aimed” (Alford); or, “the fulfilment of accomplishment of the Law” (Calvin); give the law an office that God did not give it. There is not in all Scripture a hint of the doctrine that Christ’s earthly life – His obedience as a man under the Law, is “put to the account” of any sinner whatsoever!  That obedience, which was perfect, was in order that He might “present Himself through the eternal Spirit without spot unto God”, as a sin-offering. It also was in order to His sacrificial death, as “a curse”, for Israel.

The gospel does not begin for any sinner, Jew or Gentile, until the cross : “I delivered unto you first of all, that Christ died for our sins” (1 Cor 15:3).

And for those under the Law, that was the end (telos) of the law. The Law had not been given to Israel at their beginning as a nation. They came out of Egypt, delivered from Divine wrath by the shed blood of the passover and from Egypt itself by the passage of the Red Sea Jehovah being with them. Go now to Elim with its “twelve wells of water and three score and ten palm trees” there the nation is encamped with their God. They have yet not been put under law at all. The Rock is smitten, giving them drink, and Manna, the bread of heaven, is given, all before Sinai!

Therefore we must believe God when He says in Romans 5:20, “The Law came in [not as an essential, but] as a circumstantial thing”. (The Greek word, pareiserchomai, “came in alongside”, can mean nothing else).

In Paul’s explanation of God’s dealing with Israel – in Romans 9:31-33, 10:5-10, and 11:5-6 – the meaning of this word telos “end” appears that, when an Israelite believed on Christ he was as completely through with the Law for righteousness as if it had never been given. He had righteousness by another way!

The vast discussion among commentators concerning the expression “the end of the Law” would never have been, had it been recognised:

1. that God gave the Law only to Israel – as He said;
2. that it was a temporary thing, a “ministration of death” to reveal sin, and therefore the necessity of Christ’s death;
3. that Christ having come, the day of the Law was over – it was “annulled” (see Heb 7:18).

It is because Reformed theology has kept us Gentiles under the Law – if not as a means of righteousness, then as “a rule of life”, that all the trouble has arisen. The law is no more a rule of life than it is a means of righteousness. Walking in the Spirit has now taken the place of walking by ordinances. God has another principle under which He has put His saints: “Ye are not under law but under grace”!