The Newberry Reference Bible (KJV) has been my Bible of choice for reading, studying and preaching for many years. (It is currently published by John Ritchie Ltd. of Kilmarnock, Scotland, and is available from Eden, Amazon, ABE Books etc.).

One of the handiest items in the Newberry Bible is the diagram of Greek prepositions, which gives the reader, in a helpful visual form, the significance – in simple terms – of all the New Testament’s prepositions.

A preposition – meaning “positioned before” – is a short word that shows the relationship between two other nearby words e.g. in, on, at, around, above, above, near, underneath, alongside, of, and for. Familiarising yourself with Greek prepositions will greatly help you in the study of your New Testament. Just to give one example, in Colossians 1.16 Paul uses three propositions – in (ev), through (dia) and unto (eis) – to indicate that Christ is the designer, the builder and owner of the universe.

So, here’s the chart:

Here’s the same chart in JPEG format (click to enlarge): 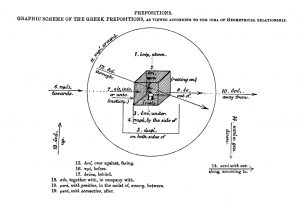 For anyone unfamiliar with Thomas Newberry (1811-1901) here’s a very brief biographical sketch. He grew up in a Christian family and was saved at an early age. Through the diligent and detailed study of the Word of God he became one of the most able expositors of his generation. 25 years of study in the original languages led to the production of the Newberry Reference Bible (originally called the Englishman’s Study Bible) published for many years by Hodder and Stoughton in various formats (single column, double column, pocket size etc.). 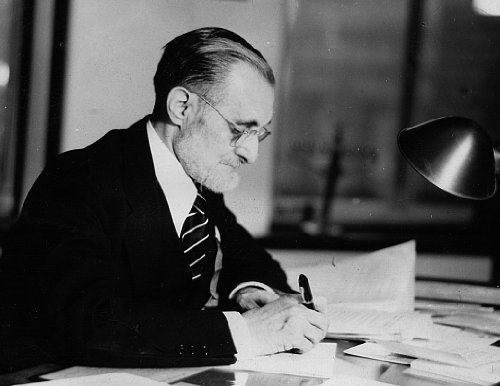 Unlike most study Bibles, rather than providing copious footnotes, the Newberry Bible utilises a range of signs and symbols to point to the original languages, so that the reader may readily know, without having a Hebrew or Greek Bible in front of him or her, what tense, or voice, or mood a particular verb is etc. Same for the particulars of nouns. Some other features of the Newberry Study Bible include:

Once a reader gets used to Newberry’s helpful signs, symbols, dates, marginal renderings and much else, it’s hard to live without it!

Though the Newberry Study Bible is Thomas Newberry’s most notable work, he also wrote a number of books, including Notes on the Temple (he produced a model too!); Notes on the Tabernacle; The Parables of our Lord and The Temples of Solomon and Ezekiel. All would make worthy additions to your library.

If you are curious to see a Newberry Bible before purchasing one, here are some options:

The whole Bible in 4 downloadable PDF are here: